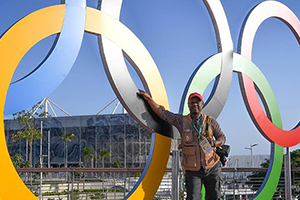 Six Stony Brook alumni are spending their summers in Rio de Janeiro, Brazil, this year. They’re there to participate, in one way or another, in the 2016 Olympic games.

The President-Elect of the Stony Brook University Alumni Association Board of Directors will be covering the games as a graphics editor (sports) for The New York Times. View Saget’s interactive piece on American gymnast Simone Biles here.

The Stony Brook track and field alumna will be representing New Zealand in the 5000m race this year, competing the morning of Tuesday, August 16. This is Oliver’s second games; she ran the 1500m in the 2012 London games. As a college athlete, she earned the NCAA national champion title in the mile race, was a six-time All-American and was named the America East Woman of the Year in 2012. Oliver has also been recognized as a Stony Brook University 40 under Forty award recipient for her post-graduate accomplishments. Read Oliver’s Olympic profile here. Find women’s 5000m race details here.

Rice is at the Olympics as a physical therapist. While a student at Stony Brook, she studied psychology and athletic training.

Milburn is participating as a volunteer in the Rio 2016 Olympics.

Slaughter, an alumna of Stony Brook’s volleyball team, is volunteering during the games.

These six alumni aren’t the only Stony Brook ties to the Olympic games this year. Campus Recreation instructor Maria Michta-Coffey will be competing in the 20k race walk.