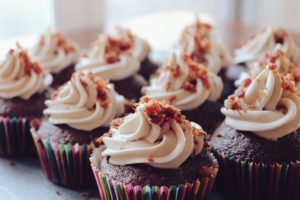 After graduation, some college students continue their education or go to work for someone else, but not Stony Brook University graduates Kimberly Burkart and Nicole Ramirez.

“I think what makes us a good pair to run a business is that we both have different strengths, and we understand each other,” Burkart, who graduated in 2015, said. “Sometimes Nicole does not need to say anything and I know exactly what she is thinking.”

Though Main Street wasn’t the duo’s first choice for a location, as they had been advised to find a space with a parking lot, Ramirez and Burkart said it was love at first sight.

“Patchogue is so up-and-coming, that’s the cool thing about it,” Ramirez, who graduated in 2016, said. “There’s a little bit for everyone. People want to try a little bit of everything.”

Burkart and Ramirez met while playing intramural soccer at Stony Brook where Ramirez studied business management and Burkart studied health sciences. After graduation, the pair soon decided that they wanted to open a business in the food industry, but they had no idea it would happen so quickly.

They taste-tested their prospective business venture at a SmallCakes located in Hunters Creek, Florida, just one of more than 100 locations. The duo immediately knew that they wanted to bring SmallCakes to Long Island.

The women’s long-term goal is to grow the business as much as they can on Long Island and hopefully open a second location. They would eventually like to explore hosting children’s birthday parties in their store, as well as catering weddings and events.

“We would love to bring cupcakes to Stony Brook for a football game or any event,” Ramirez said. “We don’t want to just be in the Patchogue community.”

Patchogue SmallCakes has eight employees, but Burkart and Ramirez said it has been difficult to keep up with the demand. During its first weekend, SmallCakes sold out every day. On Valentine’s Day, it sold 800 cupcakes, 200 more than were sold on the day of its soft opening.

Though Burkart and Ramirez were nervous to open a cupcake and ice cream shop in Patchogue, where the market is already packed with places like Queen City Cupcakes, Kilwin’s, Sub Zero and Sensationally Sweet, they have been reassured by positive reactions and returning customers.

“The cupcakes are out of this world and like nothing I’ve had before,” Liz Koza, East Setauket resident and SmallCakes customer, said. “They were fresh, light and decadent. We went with the hot fudge sundae, one of their mainstays, and the fluffernutter — a daily special. I can’t wait to go back and try more of their cupcake creations on our next visit.”

Though they have only been open a week, Ramirez said they have seen one customer return five times already.

“You can’t beat freshness,” Burkart said. “People know [they’re made fresh], and they’re happy with that.”