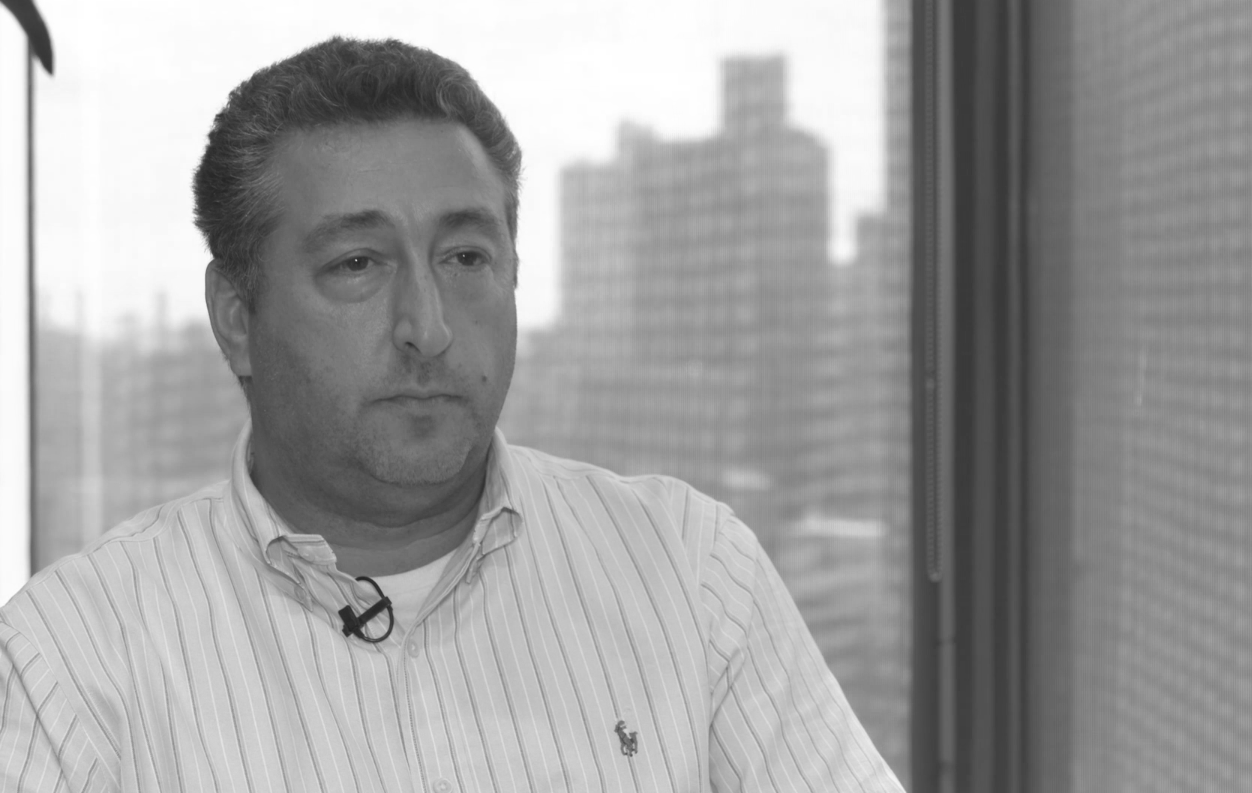 “The Man with the Big Picture – An Interview with Barry Ritholtz (Part 1)” originally appeared in The Evidence-Based Investor.

Even for someone who’s usually at his desk at 4.30 in the morning, Barry Ritholtz manages to squeeze rather a lot into his working life. He runs Ritholtz Wealth Management, a firm with $175 million in assets; he’s an accomplished author and his blog, The Big Picture, is one of the most widely-read and influential investment blogs in the United States.

But more important than any of that for me is that Barry is a long-standing proponent of evidence-based investing, as well as a firm believer in tackling the conflicts of interest in the investing industry and promoting better outcomes for consumers. I recently interviewed him at his office in New York, and what he had to say was so fascinating that I’ve divided the interview into two parts. In this, the first part, Barry discusses his career, the future of wealth management.. and the one piece of advice he would give to every investor.

Tell me about the journey you’ve been on, and how you came to realise that the way the vast majority of people invest is not the way to do it?
I began as a trader and I sat next to a row of guys. One guy was making a lot of money and the guy next to me wasn’t making money, and it kind of perplexed me, as a newbie. It looked like they were doing the same thing — you know, moving stuff around the screen, buying this and selling that — but this guy was really profitable and the other wasn’t. And so I started, about 20 years ago, researching what was then the nascent field of behavioural economics, why people’s psychology works against them in capital markets. And gradually, over time, I became less and less active as an investor. My holding periods became longer and longer and eventually I more or less adopted Warren Buffett’s “my holding period is forever” philosophy. I started thinking in terms of decades and not weeks and months.

So the behaviour gap is one reason why ordinary investors consistently underperform. Another, of course, is fees. How important are they?
A study was done by Morningstar, and it said that if you know nothing about two funds, except for the fees, pick the one with lower fees and over time, statistically, that fund is much more likely to do better than the other fund. Humans love a good story. They want a hero and an anti-hero. They want some action. They want something to talk about at the dinner party, barbecue or whatever. And so you end up with people watching financial TV, chasing whatever the latest hot thing is. All that stuff, it has been overwhelmingly demonstrated, doesn’t work. No, you pick a broad asset allocation model, the lowest-cost funds, you rebalance once or twice per year.. If you just do that, you’re ahead of 95% of your peers.

What did you make of the recent market correction and how people reacted it?
It was a 10% correction — that’s it. And the reaction was, liquidate my holdings! Give me bottled water and gold and I’m moving to a cave! This is the first 10% correction we’ve had in over 660 trading days — almost three years. Stop and think about that. Typically, you’ll see a 10% correction every year or two. We heard the same level of screaming with the market 3% off its all-time high. People were losing their mind. They’d become used to a market that’s gone in one direction, which had been practically straight up since the bottom in March 2009. The S&P 500, from the bottom of ’09 to the peak earlier this year, is up over 200%. It’s tripled. That’s a huge, huge number. So people get lazy, they get spoilt. They get used to throwing money at the market and it goes higher. The low-hanging fruit has been picked. It’s not going to be that easy going forward.

If you could give investors one piece of advice, what would it be?
Get out of your own way. The biggest enemy of the investor is themselves. You know, there are a number of studies that look at investor performance not versus a benchmark but versus their own holdings. And most investors underperform their own holdings. Now why is that? Well, some guy shows up on TV. His funds are strong that year. He looks the part. He sounds good. So investors all pile into that. And what happens at that point is the mean reversion begins, and then after that hot streak comes to an end, that fund either goes back to normal returns or worse. So what do people do? They sell out at the bottom.

The ideal time to buy is not when something has had a huge run-up and the guy is on the cover of a mutual fund magazine. You should say, I’m buying because I want exposure to this asset class and this is the least expensive and most efficient way to get that exposure. Don’t chase the hot hands. Don’t jump into something you don’t understand. Simple is better than complex — we preach that all of the time. When you look at all of these complex hedge funds and sophisticated venture capital and private equity funds, that stuff is nonsense. Vanguard has a number of studies which have demonstrated that the typical 60/40 stock bond portfolio has outperformed the hedge fund index, the venture capital index, the private equity index — with a lot less volatility. You know, 2 and 20 is a huge bogey to overcome, and that’s why Vanguard has become a $3 trillion dollar firm.

And yet passive funds still account for a very small percentage of assets under management globally, don’t they?
It’s a drop in the ocean. There are about $60 trillion dollars in liquid investable assets worldwide. Once you start bringing in non-liquid assets like art and collectable cars and jewellery, you can add another $20 or $30 trillion dollars in. We’re not even talking about real estate, which is another God knows how many tens of trillions of dollars. So let’s just use 60 trillion in liquid investable assets. The index holdings of Vanguard are about $2 trillion. Add another few iShares and BlackRock indices, and what are we up to? $3 or $4 trillion? Out of 60 trillion it’s almost minor.

Do you see that changing? And, if so, how should the industry respond?
Here’s the transition that’s going on and it’s really quite fascinating. First came the transition from active stock management and market timing to a more passive, index-based approach. That’s been happening since John Bogle created Vanguard, and it’s really accelerated over the past decade. In the 2000s, we had the dotcom crash and the real estate boom and bust. Then came the commodity boom and bust and the financial crisis of 2008-09. I think a lot of “mom and pop” investors looked at Wall Street and looked at all these options and said, that’s too complex, I’m just going to go with a simple index, and it seems to be a whole lot less of a headache, plus I don’t need to spend a whole lot of time on it every day, week, month. I have other things to do with my life.

But people still need smart financial advice. You’ve got companies like Wealthfront and Betterment, which offer automated, programmable, low-cost investing online. They’re fantastic for what they do. Where I think they run into a little issue is that at some point people have more sophisticated financial needs. There’s generational wealth planning, or the sale or purchase of a business; there are trust and estate issues, complicated tax issues, insurance questions — all sorts of things like that. That’s why we’re a financial planning firm. We do both asset management and financial planning. That’s really where we earn our stripes. It’s the ability to say, OK, here’s where you are in your life, you have all these other things that need taking care of, and then, when you hit retirement age, when do you start drawing down social security? Or how much money do you draw out on a monthly basis? The online advisers are not quite there yet with that sort of advice. Maybe one day they’ll get there, or maybe they’ll just say, hey, here’s an inexpensive alternative for people who don’t have a lot of money to invest. For a long time that niche was completely ignored.

What about small advisory firms (or RIAs as you call them in the US)? Where do they fit in?
There are lots of RIAs with fairly modest assets under management. I’m not sure if they’re going to have to pivot and become full-service RIAs or if they’re just going to stick with that niche. It’s tough to run something profitably when you’re changing between 10 and 40 basis points. That’s not a lot of money on $3 or $4 million dollars. Right now, most of these guys are very good, low-cost providers of just a basic asset allocation model. They’re filling a need. The big firms are fortunate in that they have this huge venture capital backing so that they can spend money beyond what their revenues produce. All firms, eventually, are going to have to figure out what they want to be.

Three faculty from Stony Brook University’s College of Arts and Sciences have been honored with the rank of Distinguished Professor by the State University of New York Board of Trustees: Xiuxiong Chen, Department of...

This year’s campaign centers on discarded face masks, disposable gloves and other PPE that are ending up on sidewalks, parks and other outdoor spaces instead of in the trash.

The Stony Brook Entrepreneur Challenge provides students the chance to win a share of $50K to help cover start-up costs for their businesses and advance to the statewide competition.