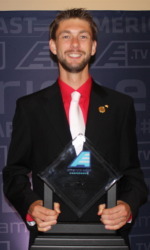 Speakman graduated in May with a 3.9 cumulative GPA

Eric Speakman (Napier, New Zealand) from Stony Brook cross country and track and field was tabbed the 2014-15 America East Man of the Year on Tuesday night at the conference’s annual awards dinner on Mount Washington in Bretton Woods, N.H. The honor recognizes the conference’s senior male student-athlete who has best distinguished himself throughout his collegiate career in the areas of academic achievement, athletic excellence, service and leadership.

Speakman wrapped-up his outstanding athletic career this weekend at the NCAA East Regional, advancing to the event’s second round. It was the second time he qualified for the NCAA Regionals in his career. The multi-time all-conference selection in track and field and four-time America East Scholar-Athlete award winner was the Most Outstanding Rookie at the 2012 America East Indoor Championship.

As impressive as he was on the track, Speakman was even more heralded as a cross country runner. In the fall, he became just the fifth male to win the America East individual cross country title for a second time, also winning the race in 2012.

A double major in business and economics, Speakman graduated in May with a 3.90 cumulative GPA. He was a member of the Dean’s List every semester of his career and was a Stony Brook Presidential Scholar for having a perfect 4.0 semester GPA six times.

Also contributing to his recognition as the Man of the Year was his dedication to Stony Brook University and the community. He served as a three-year captain for the Seawolves’ cross country and track and field programs, volunteered as a PACK mentor, Red Watch Band member, Cerebral Palsy Quality Friend, and also served as the treasurer for the Stony Brook chapter of The Supply.

Also honored on Tuesday were 18 student-athletes from America East institutions for their dedication to bettering their community through service. The men’s honoree from Stony Brook was Gabe Vazquez (South Ozone Park, N.Y.) from cross country and track and field and the women’s honoree was Shannon Grogan (Eastampton, N.J.) from women’s soccer and track and field.

Vazquez is the President of The Supply Chapter at Stony Brook. The organization’s mission is to activate the urban slum youth to transform their communities through service learning. Additionally, he served as a Stony Brook University Summer Orientation Leader, a SAAC representative and a PACK Peer Mentor.

Grogan is also a SAAC representative and PACK Peer Mentor. She was one of two student-athletes to serve in the Stony Brook University Student Ambassadors Program, representing the university at high-profile events on and off-campus. Additionally, Grogan volunteers once a week at the Stony Brook University Pediatric Oncology Unit through the Play it Forward program. During her visits, she spends time with patients and their families while they wait for treatment.