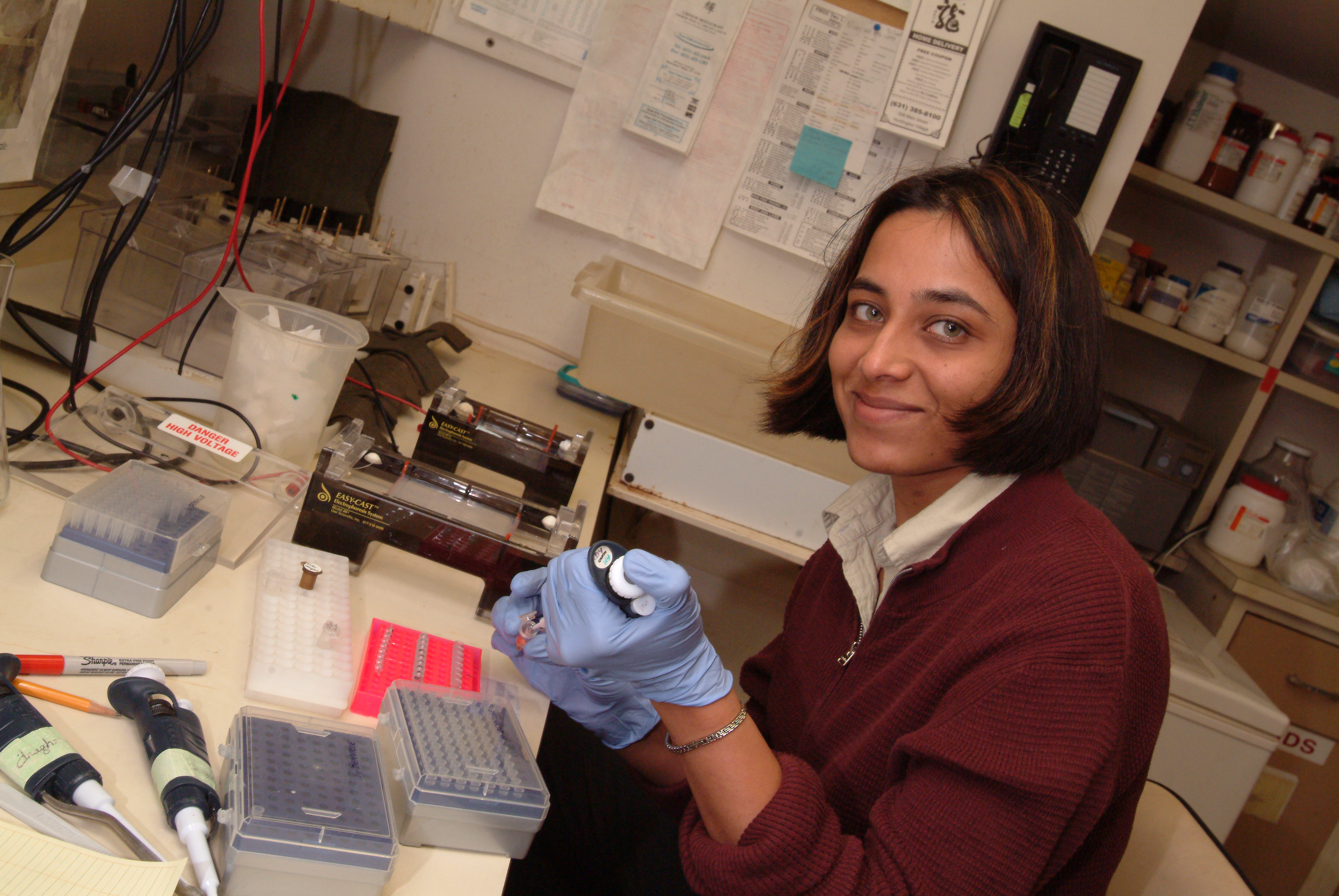 Next time you order your prescription, you might have a Stony Brook University graduate to thank. Indian-born Anagha Matapurkar ’06 earned a PhD in molecular and cellular biology at Stony Brook University and parlayed that into her current job as a patent agent for Forest Laboratories in New York City, where she evaluates drugs for pharmaceutical companies to market.

While she is not directly involved in doing research as she did during her Stony Brook days, Matapurkar credits her research background for developing her analytical skills enabling her to “get into each problem deeply.”

She said that her job is twofold — to manage a patent portfolio for approved and pipeline drugs and conduct “due diligence” on licensing and acquisition opportunities for pharmaceuticals in various stages of development.

She files patents on the approved new drugs with the Patent Office in Alexandria, Virginia.

It was the Fundamentals of Bioscience Industry Program at the Center for Biotechnology at Stony Brook and former course director and Sr. Vice President, Chief Intellectual Property Counsel at Forest Laboratories, Charles Ryan in particular, that set Matapurkar on her career path [in intellectual property]. “That was the game-changer,” she said.

“He told me about an internship at Forest Laboratories, which I applied for. They made me an offer, and I accepted.”

She said that a common assumption among researchers is that you’ll get your PhD and eventually run a lab. “I took a different path,” Matapurkar said. “While I’m doing something different than I studied, I still rely on the technical background I have because I understand science and law.” In addition to relying on her problem-solving skills, Matapurkar said she loves being a patent agent because “I get to work on a different project every week and learn something new about patent law every day. I love the challenges and feel my mind is being put to good use.”

In 2008, Matapurkar spoke at the Long Island Life Sciences Initiative Roundtable at Stony Brook to let other students know about the intellectual property field. “I enjoyed talking to graduate students and exposing them to the idea that they are not just limited to what they are doing today,” she said.

She fondly remembers her first days at Stony Brook and in the United States but acknowledges experiencing a certain degree of culture shock. It was 2000, and armed with a bachelor of science and masters in molecular biology, she embarked on the pursuit of her PhD.

She emigrated from India with her husband Sachin Ranade, Ranade ’07 graduated with a PhD in neuroscience and works as a post doc at Cold Spring Harbor Laboratory. When they moved to the U.S. they had no car, lived off campus and “it was spaghetti every night for a month at a time.” As if all of these simultaneous changes weren’t stressful enough, Matapurkar’s academic schedule included a four-lab rotation, coursework and teaching. In her second year, she chose to work in laboratories at both the University and Cold Spring Harbor, which enjoys a two-decade-long shared PhD program with Stony Brook. She remained on campus for her coursework. Rolf Sternglanz ran one of the labs she worked in at Stony Brook and the relationship affected her deeply.

“He was focused, organized, logical and said exactly what he thought, she said. “He really cared about his students and made sure they graduated on time.” Sternglanz also served on her thesis committee.

Matapurkar is a firm believer in giving back to her alma mater and she served as president of the Alumni Network Executive Committee in 2006.

In her seventh year with Forest Laboratories, she renews her commitment to Stony Brook by being actively involved with her company’s internship program. “We reach out to Stony Brook students and usually employ one per year,” she said.

“This is personally rewarding to me,” said Matapurkar. “I remember being at that impressionable age and not knowing what to do. Stony Brook came at the right time for me when I was looking for direction. Now I want to pay it forward.”