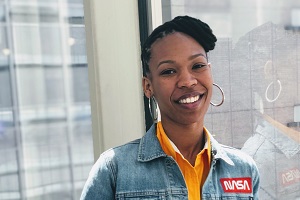 For Sabrina Thompson ’07, not even the sky is the limit.

As a NASA Engineer, artist and aspiring astronaut, this 40 Under Forty honoree’s skills are as diverse as they are impressive. In her daily work, Thompson designs trajectories, develops mission designs and performs orbit analyses for CubeSat spaceflight missions. Before she found engineering, though, she was enamored by art.  Now, she is working hard to bring together the two worlds she loves.

Thompson wants to help young girls foster an early interest in STEM, and she’s using art to pave the way.  In fact, at the core of this work is her painting, “Girl In Space,” which features a female African American astronaut, an embodiment of who she is and who she hopes to become.

When did you realize that you wanted to pursue engineering?
When I was a senior in high school, I was struggling to decide what to study. It was actually my art teacher that suggested engineering. Besides what I read online, I did not know much about it.  But I learned mechanical engineering was the broadest form of engineering, so I had that in mind going into Stony Brook, and it worked out.

Who inspired you at Stony Brook?
My first semester at Stony Brook was very tough. Subjects I excelled at in high school became troublesome for me in my first year.  However, the Collegiate Science and Technology Entry Program (CSTEP) and Louis Stokes Alliance for Minority Participation (LSAMP) programs were a big help. People there tutored me in Calculus and Physics. They encouraged me and helped me plan out my college career, in addition to getting me through my first semester. Paul Siegel, Assistant Director of LSAMP, was instrumental in these efforts.

Tell us about your journey to NASA:
Throughout my time at Stony Brook, I had an internship every summer. I interned at Honda of America, Brookhaven National Lab, and a local product design company called Kaleidoscope. After each of these experiences, I was ready to return to school and learn more. I started to worry this meant I wasn’t ready for the workplace or worse, I’d never find a job I was fully satisfied with.  However, I was able to identify key elements about each internship that I enjoyed. At Honda, I realized I enjoyed working on complex systems, breaking them down and really understanding them at the sub-system level. At Brookhaven, I found that I really enjoyed a laid back environment where everyone really enjoyed what they were doing. I also liked the product design aspect at Kaleidoscope, where I could create things from scratch. Putting all of these pieces together, NASA came to mind. But, I still didn’t think I was ready for the workplace, so I went to grad school and studied aerospace engineering with NASA in mind. Around that time, I also took an internship at NASA Glenn in Cleveland as part of the NASA Academy program. I was exposed to different NASA Centers throughout the country. It was a great experience that won me over. After that, I knew exactly where I wanted to work.

What are you working on now?
I recently started a business which ties together art and STEM to create STEAM. My goal is to encourage girls, especially African American girls, to show an interest in STEAM, by showing them STEM through art, whether it’s through my paintings or hands-on activities. I’m currently writing a book for young readers, targeted towards girls in middle school. I want to bring the creative side to the STEM world. I’m holding workshops and speaking engagements to encourage girls to do this.

What piece of advice would you share for females who are pursuing a career in a STEM field?
Whether you’re female or not, do not be afraid to make mistakes. That’s how you learn. I think that’s critical, because it’s one of those things I had to get over, especially working for NASA. Give yourself a chance to make mistakes and be yourself. Because I have an artistic side, sometimes I see things from a different perspective than others I work with, so it’s important to trust yourself and be confident.

As a woman, especially as a woman of color, it is important to know you are going to run across situations where you are going to be overlooked in the room. Do not accept that. You don’t have to be rude about it, but you don’t have to accept it. The STEM world is dominated by men, and sometimes men work in a different way, and it could seem the norm, but it doesn’t have to be. We, as women, can approach problem-solving from a different perspective.

What does a typical day in the office look like for you?
Right now I’m pursuing a PhD in atmospheric physics. Currently, on a typical day, I’m balancing coursework and studying with the work I’m doing at NASA. Typically, I spend a majority of the day designing orbits. It’s a lot of modeling and simulations. A large part of time is also spent talking to the scientists to make sure the orbits I’m developing are meeting the science requirements. Sometimes, a change in a single parameter spec causes an entire orbit to be re-designed. In addition, I have a huge whiteboard in my office where I do a lot of hand calculations and drawing.

How about a typical day off?
When I’m not at work, the artistic side of my brain goes into overdrive. Sometimes my mind is full of creative ideas and projects I want to pursue and there’s no limit. Recently, I bought a sewing machine, so I’ve been making patches and learning how to stitch text and add artsy flavors to my clothes. Sometimes I’m painting or even reading. I really love Washington, DC because there’s always something happening. There are a lot of free, artsy activities I like to take part in.

Your accomplishments speak for themselves, but what is it that you’re the most proud of?
I will be really proud of myself with the STEAM initiative I’m working on to bring STEM into the lives of young girls.

Right now, I’m very proud of my artwork, specifically my “Girl in Space” painting. I can be very calculated. Sometimes the “paralysis by analysis” thing happens when starting a new art project and I end up not starting the project at all.  But this was something that just came to me. I was Googling art featuring Black female Astronauts and nothing resembling such a thing popped up.  I saw this as an opportunity to create the image I was looking for.  I actually finished the “Girl In Space” painting in a 30 minute Facebook Live set that I was part of for an art group call The Sanctuaries in Washington, DC.

When I speak to girls, I wear a shirt with this image on it and I always ask if they’ve seen an image like this. One girl actually said it looks like me. Subconsciously, maybe it is an image of myself. I do have aspirations of becoming an astronaut. I keep a print of my painting above my computer screen as a reminder of what my goals are. It’s inspiring for me, and I believe it’s inspiring for others, whether they see themselves or something different, it represents a future that’s inclusive.