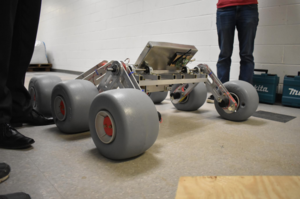 Stony Brook University’s Robot Design Team is building a robot to compete in the University Rover Challenge, a competition to build a rover equipped to explore Mars.

The competition will take place at the Mars Desert Research Station outside Hanksville, Utah, where the sandy terrain is meant to mimic that of Mars. Rovers must be able to traverse the ground autonomously, complete an extreme retrieval and delivery task where the rover must pick up and deliver objects in the field, collect and analyze soil samples and pass the terrain traversal test, meant to assess the rover’s suspension and design.

This marks the first year that the club will be participating in the contest. In the past, the robot design team has been limited to smaller competitions, such as ShepRobo Fest, where they fight in recreated sci-fi universe scenery.

“Our robot this year is almost 90 pounds,” Qu said. “So we went from something I can pick up with one hand to something that weighs almost as much as me. It’s insane how much the team has come in one year.”

The robot isn’t the only thing that grew in size — Qu said that the club has grown to include over 50 active members, in contrast to 30 last year.

The club runs several outreach initiatives, both on campus and across Long Island.

This past summer alone, the club presented at a free tech camp and the Eastern Long Island Mini Maker Faire, a venue for “makers,” from artists to scientists to engineers.

On campus, the Robot Design Team has a table at involvement fairs, presents in classrooms and makes an appearance on Admitted Students Day for mechanical engineering. It also participated in CommUniversity Day, an event meant to highlight the campus community through entertainment, discussions, tours and interactive activities.

Team leaders within the club are very willing to teach new members who come in with different skill levels. Some new members, like freshman computer engineering major Sasha Sokolov, started teaching workshops their first year. Others may come in with virtually no experience.

“We try to be as welcoming to beginner people as possible,” said Joseph Cullen, software team lead and a senior computer engineering and applied mathematics and statistics double major.

The club hosts workshops throughout the year to teach basic skills to its newer members, and the executive board and team leaders hold office hours.

“I personally think a lot of people don’t get this, but the important part of engineering is that you get actual practice,” said Prangon Ghose, club member and freshman computer engineering major. “Because like the classes teach you stuff, but you’re not really understanding, like if a professor talks about a motor, like what is actually a motor. You actually need to be working on it.”

Qu described the club as a hands-on, collaborative experience.

“We are the largest interdisciplinary engineering design team on campus,” she said. “No one has computer science, no one has computer science with electric and mechanical, and now science. You get this opportunity to work with different majors, and a lot of people in different fields and you’re exposed to things you wouldn’t normally be if you were just a mechanical engineer.”

Click here to read the original article published in The Statesman