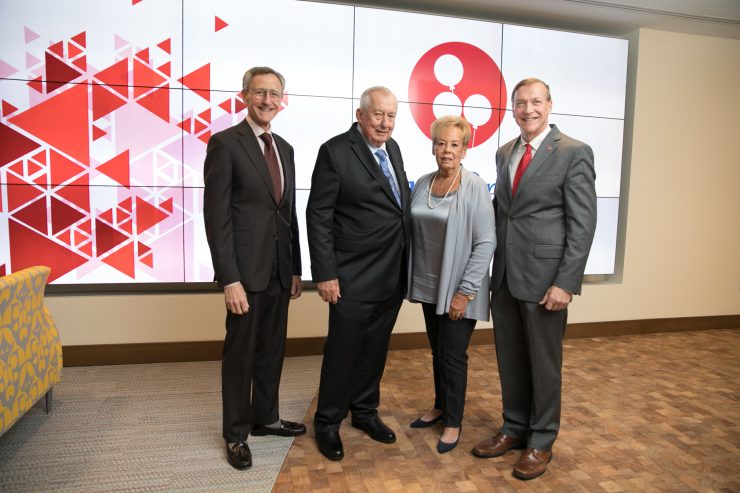 It’s hard to understand the meaning and value of pediatric emergency care until a child you care about needs it.

That’s a lesson that Susan Richard-Habberstad learned all too well 17 years ago, when her daughter, Courtney, was rushed from her equestrian camp with a lacerated spleen and a shattered left kidney.

“Sometimes, you have to make some really important decisions,” Richard-Habberstad said, “and sometimes they come from your instinct.”

Richard-Habberstad’s instinct told her that the place where her daughter would get the best possible care was Stony Brook University Hospital.

Over time, as nine-year-old Courtney recovered from her injuries – which required two blood transfusions and nearly cost her a kidney – she experienced firsthand the difference that the patient-centered care at Stony Brook makes in the healing process, particularly for a child.

“The support and care that I received from the doctors and nurses made me feel very comfortable, that’s for sure,” said Courtney, now 26 and living a full, healthy life in Charleston, S.C.

Now, 17 years later, the upcoming opening of Stony Brook Medicine’s new Children’s Hospital will include a tangible commemoration of gratitude from the Richard family. The new lobby of the Children’s Hospital will be known as the Peter and Nancy Richard Family Foundation Lobby, an honor that comes in recognition of a $3.5 million gift from Peter and Nancy Richard to establish the Pediatric Emergency Department Expansion Fund. This new capital initiative will expand the current emergency room to meet existing and growing demand for pediatric emergency services in Suffolk County.

“One of the things that we’re most excited about as we open our new Children’s Hospital is our being able to offer exceptional pediatric care in a state-of-the-art facility, with exceptional amenities and innovations,” said Senior Vice President for Health Sciences Dr. Ken Kaushansky. “We are truly grateful to Peter and Nancy Richard and their family for their impactful gift, which will make an immeasurable difference for children and families across the region.”

For the entire Richard family, the gift is truly fitting, and not only because of the role that Nancy and Peter (the longtime executive vice president of the P.C. Richard and Son chain of appliance and electronics stores) played in supporting Courtney through her recovery. Susan, in particular, knows that taking care of children is a passion for Peter and Nancy, making the gift and naming a perfect fit.

“I’ve always enjoyed being around children because I like to teach them things that I have learned,” Peter Richard said, “and I want them to be happy. It makes me very proud that I am able to do something like this for children.”

Having seen the new Children’s Hospital Pavilion under construction, Courtney can appreciate just how much of a difference her grandparents’ philanthropy will make.

“I was just in the children’s wing when I was at Stony Brook,” Courtney said. “I would get in the elevator, see sick adults and it was scary. When I toured the new building, it didn’t seem like a hospital. It seemed like a camp. The hardest thing was seeing my mom sleep in that recliner.  I’m happy that now there will be private rooms and new spaces for families. It doesn’t have that “hospital” feeling. It’s a community more than a hospital. That’s what I like most about it.”

“Since we announced Stony Brook Children’s Hospital in 2010, we have provided patient- and family-centered, age-appropriate care and ‘ouch-less medicine’ for the children of our region,” Dr. McGovern said. “We’re excited to open a new prospectively designed, state-of-the-art facility that was built to support that approach. We are thankful to have the Peter and Nancy Richard Family Foundation as part of the new Children’s Hospital.”

And for Peter Richard, seeing his family’s name on the lobby is sure to be an emotional experience.

“It brings tears to my eyes,” Richard said. “I’m proud that I really did something to help sick children and their families.”

And that help is truly appreciated.

“Peter and Nancy Richard have had a monumental impact on our Suffolk County and Long Island communities for generations,” said Stony Brook University President Samuel L. Stanley Jr, MD. “We are truly proud and grateful to have the Peter and Nancy Richard Family Foundation Lobby and the Pediatric Emergency Department Expansion Fund as part of their legacy, and look forward to translating their philanthropy into a measurable impact on children’s lives throughout our region.”