Reservation for Two (Species): Fisherman and Dolphins Are Grabbing a Bite at the Same NY Artificial Reef 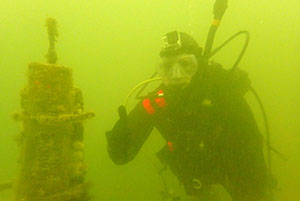 There’s plenty of fish in the sea for human fisherman and bottlenose dolphins to feast on and now, according to a study by researchers at Stony Brook University published in Marine Mammal Science, both species are using a New York artificial reef at the same time to find fish to eat – a new finding.

Using an underwater microphone deployed at 55 feet on an artificial reef three miles south of Atlantic Beach on Long Island, researchers were able to observe the sounds made by both species to determine eating habits and timing. Stony Brook graduate student in the School of Marine and Atmospheric Sciences and lead author, Colin Wirth, listened to recordings from a six-day period in June 2015 and identified sounds from human activity (recreational boat engine noise), bottlenose dolphins and noise-making fish (weakfish, oyster toadfish.)

“Dolphins make lots of very different sounds – whistles to communicate, clicks to find fish and even one that sounds like a gun going off. Boat noises are very distinct, you can hear the engines go in and of gear, so you can tell when boats are drifting at idle or are moving back and forth over the reef. It’s interesting to think about how we used the sounds to identify what fish were present and wonder if the dolphins are doing the same thing,” said Wirth.

The underwater microphone also captured sounds from animals that were not seen visually during numerous visits to the reef. “With the planned expansion of the NY artificial reef program by New York State, there are numerous opportunities to extend this work to multiple locations and new sites to further study how humans and dolphins (as well as other species) are sharing these habitats,” said Joe Warren, Stony Brook University SoMAS Associate Professor, Wirth’s advisor and co-author of the study.

Multiple artificial reefs have been constructed by New York State and are designed to attract fish and provide a productive location for recreational fisherman to use.