Reflecting on the Life of Ashley Schiff 50 Years Later 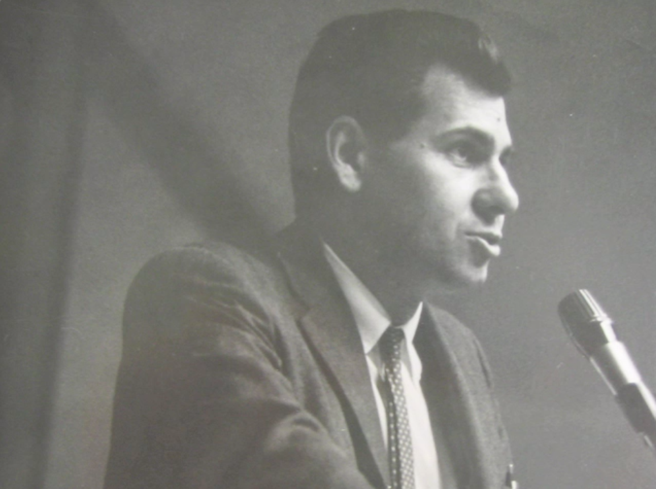 Ashley Schiff was passionate in everything he did.  He never came to class to merely lecture. He would prod and show great delight when students delivered the proper responses.

This Fall, we sadly observe the 50th Anniversary of the passing of Professor Ashley Schiff.  While his dedication to improving campus life as Master of Cardozo College is well-known and his conservation efforts are legendary (Did he really chain himself to a tree destined to be chopped down?), what I remember most is Ashley Schiff, the teacher and mentor.

Ashley Schiff was passionate in everything he did.  He never came to class to merely lecture. He would prod and show great delight when students delivered the proper responses.  You did not take a Schiff course if you were looking for an easy ‘A’. While he was a demanding teacher, what he really taught me was critical analysis.  I still vividly recall two classes. In one, he came into the room and asked “What’s wrong with page 28?” After I stopped looking for typos, I realized that there was some logical fallacy that he thought was glaring.  This method of challenging written materials was not without humor. In another class, a fellow-student was having difficulty explaining the meaning of an article that was part of an assigned reading. Professor Schiff commented “It can’t be that difficult – I know the author”.  From those days on, I learned to read everything with a critical eye.

In my senior year, I became Professor Schiff’s student assistant.  I am sure that his recommendation helped with me to receive a fellowship for graduate study at Indiana University.  Unfortunately, 1968 was not a great year for men to graduate college, with the Vietnam War raging and the draft looming over my head.  When Ashley Schiff learned that I was considering doing something that may have resulted in very negative consequences, he took the time to call me at Indiana to talk me out of it.  That action went far beyond a teacher’s job description. This was caring at its finest.

I was married in June, 1969.  Ashley and Dorothy Schiff were honored guests at my wedding.  His influence was noticeable in our honeymoon choice. He helped plan our trip out West, where we visited many of the National Parks.   At the end of that summer, my new wife (also a Stony Brook grad) and I met Professor Schiff when he came to New York City to attend the American Political Science Association Conference.  Little did we know that it was the last time we would see him.

About a month later I was in Navy boot camp when I heard the news that he had died.  He was 37 years old, leaving a wife and three young children. Along with all stress involved in recruit training, I felt that I had lost my guiding light.

It is so hard to believe that it has been fifty years.  I still think of him often. Thank you, Professor Schiff, for showing me the art of critical thinking, for demonstrating the value of commitment to chosen pursuits and causes, and for having been such a significant influence on my life.

Dr. Ashley Schiff was a dedicated and popular Associate Professor of Political Science and avowed naturalist in the early days of Stony Brook University. In the early fall of 1969, he died suddenly and unexpectedly at the age of 37, leaving behind a wife and young family. In 1970 a 26 acre woodland, lined with oak and maple trees, often walked by Prof. Schiff and his students was set aside to honor him. This Nature Preserve was dedicated in his memory by the former U.S. Interior Secretary Stewart Udall and SUNY Stony Brook President John S. Toll. The Ashley Schiff Park Preserve is located in the southern campus between Roth Quad and the Marine Science Research Center.

This story was submitted as part of “My Stony Brook Memories,” an initiative of the Stony Brook Alumni Association to collect and share cherished memories, stories and reflections written by Stony Brook’s own alumni. Send us your news and memories here.