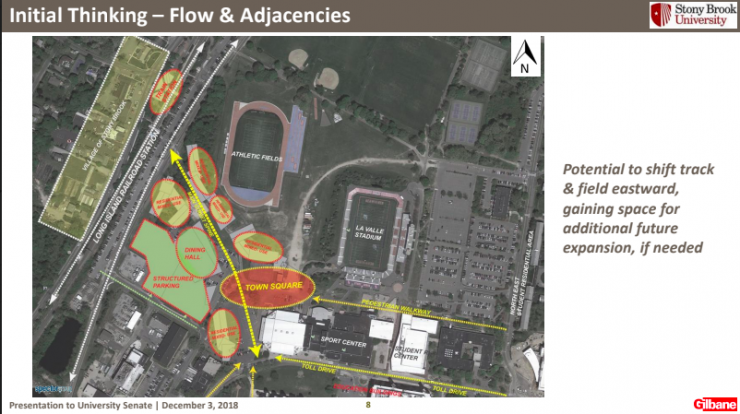 “This is a concept that originally emerged in 2016,” Dexter A. Bailey, senior vice president for Advancement and executive director of the Stony Brook Foundation said. “This [is] recognizing the continued demand for housing on the campus both from undergraduates and graduate students.”

This semester, approximately 500 freshmen were placed in forced triple rooms due to lack of bed space, according to a PowerPoint presentation shown at the meeting.

As of now, the project is slated to add 1,680 new beds for undergraduate and graduate students. The village would also include retail space, a faculty alumni center and an outdoor promenade dubbed “Seawolves Square.”

In order for the project to move forward, an environmental assessment and independent housing demand study must be completed. Vice President of Gilbane, John D. Keegan, said both of these steps are currently underway and the results should be in by January.

Once construction begins, Keegan said the development will take about three years to build.

When asked how the university planned to pay for the project, Keegan explained that Gilbane would foot the bill. “We would envision financing this project largely through bonds,” he said, adding that rents would be “in line with what students already pay on campus.”

Several senators said they were concerned that faculty had not been consulted about the project beforehand.

“This is the first time we’re hearing about this,” Norman Goodman, distinguished teaching and service professor in the sociology department, said. “This body has argued for years that the Senate needs to be involved in the planning of projects, not just the comment after it’s done. What I see here is the reverse of that.”

Bailey insisted that the project had not been finalized yet. “At this point, there’s no ground lease, there’s no contract, there’s no shovel in the ground, there are no [subcontractors] hired, there’s no architect,” he said. “We will include the campus community as we move forward.”

Jared Hoke, a freshman psychology major who attended the Senate meeting, said he thinks the village will receive strong support from students. “There are too many people and not enough space, so this is something that’s really necessary for students to be comfortable. I would definitely be interested in moving into a space like this.”