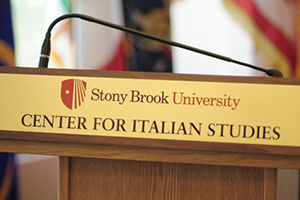 When Italian American and prominent Nassau County resident Vito DeSimone reads the headlines of the country’s growing international political and economic disarray, he underscores his lifelong philosophy: That cultural education and awareness are critical ingredients to modern society.

“The importance of inclusion and teaching of culture to up and coming generations can’t be understated,” DeSimone said. “To compete in today’s world, you as an individual and the United States as a nation cannot afford to be isolated. We all need to be aware of and to learn about other cultures and other mentalities. Education is literal freedom.”

To help facilitate that education, he’s given $100,000 to the Center for Italian Studies at Stony Brook University to establish the Dr. Vito and Carolyn DeSimone Endowment for a Visiting Lectureship in Italian and Italian American Studies.

For more than a quarter century, the Center for Italian Studies in the College of Arts and Sciences has built a strong cultural bridge between the University and the surrounding community through Italian language courses for adults and children, lectures and conferences, annual film festivals and more. DeSimone hopes to reinforce that connection through a course aimed at the Italian American experience through literature. The course will be taught by different lecturers every year and the subject will change to explore larger swathes of the Italian culture.

“From its inception, Dr. DeSimone has been actively interested in the Center’s development, visibly participating at our events, often serving as a presenter on its programs or assisting with his skills as a reporter and producer of video programs dealing with Italian and Italian American affairs,” said Mario B. Mignone, director of the Center for Italian Studies. “It’s extremely gratifying to have Vito and Carolyn select our Center as the recipient of their donation.”

For DeSimone, the lectureship satisfies two goals: To educate young Americans on the values of the Italian American heritage and the impact it’s had on modern society; and to encourage students, community members and their peers to investigate and take pride in each other’s heritage and respective culture.

DeSimone also finds joy in supporting a University that aims to keep educational costs low. “In a sense, I’m helping those institutions that helped me,” he said, and he has come a long way.

Born in Italy, DeSimone was still a child when Americans liberated his town during World War II. He later migrated to Venezuela in 1953 at 14 before landing in the United States in 1959, claiming his American citizenship as the son of an American born abroad. After two years working in the garment industry — and having acquired fluency in English — he became an interpreter for the Criminal Court of New York while attending night school at City College. “Without the free education offered to me through CUNY, I would not have been able to acquire the knowledge that’s served me intellectually and economically,” he said. He later earned his a PhD in Italian Literature from Rutgers University.

“As I became more involved with school, I became aware of the world around me,” Desimone added, and that’s the awareness — acquired by studying different cultures — he hopes to encourage in today’s Stony Brook student. “Look anywhere outside of the United States and you’ll find a different world; a different thinking that will help you become more aware of possibilities. Without education, culture suffers.”

Dexter A. Bailey Jr., senior vice president for University Advancement, said that the leadership gift from DeSimone will greatly impact the Center for Italian Studies mission. “Study of the Italian culture at Stony Brook is an important asset for any student’s personal and intellectual development,” Bailey said. “This gift is one that ensures the cultural IQ of our students and that of our surrounding community.”

DeSimone’s gift counts toward The Campaign for Stony Brook, a $600 million fundraising effort and the largest in SUNY history. Make a gift today and help Stony Brook affect powerful change on Long Island and around the world.

More than 42,900 people have given over $541.2 million in support of Stony Brook students, faculty and patients; read their stories here.