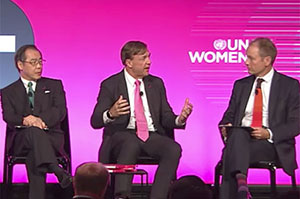 President Samuel L. Stanley Jr., MD, told a group of leaders in combating gender bias worldwide that he has a critical goal for Stony Brook University: to use the power of scientific research to create true gender equality and build a campus free of gender-based violence.

Alongside heads of state, top ranking corporate executives and other university presidents from around the globe, President Stanley shared bold strategies and ambitious goals for the University in support of gender equality at UN Women’s HeForShe IMPACT 10x10x10 Parity Report Launch event in New York City on Sept. 20.

“It’s our goal to create a campus that is absolutely free of gender-based violence,” President Stanley said. “We’re trying to understand why certain male stereotypes and harmful concepts of masculinity exist, and how those impact things like male student success, as well as the perpetration of sexual violence.”

Stanley explained that through groundbreaking research at Stony Brook’s Center for the Study of Men and Masculinities, and inspired by a statistic showing that 90 percent of sexual violence is perpetrated by men, an engaged working group is trying to better understand such stereotypes, how they lead to inappropriate behavior and violence, and how to apply what they learn in male-targeted educational programs used on campus.

“This is really changing the climate on our campus,” President Stanley said. “For example, we’re targeting fraternities and athletic organizations on campus, areas where we know there can be problems with sexual violence, and making sure we’re educating them.” He also emphasized the importance of dedicated research and evidence to inform decisions made regarding campus policies and cultural changes.

“All of this is part of an idea that we have to be evidence-based in what we’re doing, to understand the research, and to make choices for how we apply our resources based on science and evidence,” President Stanley said.

The event marked HeForShe’s third anniversary, as well as the release of its 2017 IMPACT 10x10x10 Gender Parity Report, within which Stony Brook and nine other leading global universities report on progress and commitments made as they strive for gender equality.

“Presidents of 10 universities are here, and in their hands is truly the remaking of the next generation,” said Phumzile Mlambo-Ngcuka, executive director of UN Women. “In young people, the world always has a chance to begin again — they are leading from the front.”

President Stanley: “It is our goal to eradicate gender-based violence from our campus.” #HeForShe @HeForShe @UN_Women pic.twitter.com/eMjgWJbjmz

A sense of collaboration across each area of leadership was strong at the event, and was showcased in particular by Vittorio Colao, CEO of Vodafone.

“The real, purest thing is education,” said Colao, speaking about Vodafone’s efforts to improve digital access to education in Africa and worldwide. “We are very proud of delivering knowledge and education — it’s the most noble thing we can do.”

Created by UN Women — the United Nations entity for gender equality and the empowerment of women — HeForShe began in September 2014 as a global effort to engage men and boys in support of gender equality. 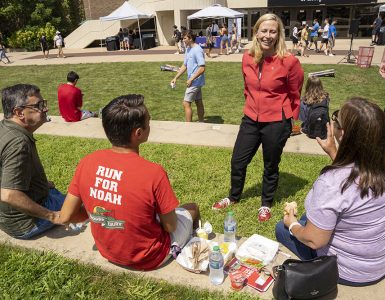