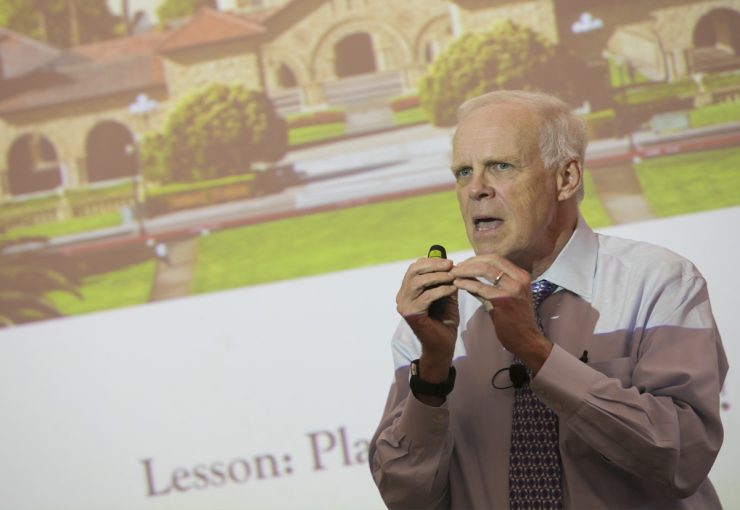 When the tenth president of Stanford University returned to Stony Brook University in April to be inducted into the College of Engineering and Applied Sciences Distinguished Alumni Hall of Fame, he had just been announced as the new chairman of the board of Alphabet, Inc., the parent company of Google. Two weeks earlier, he had been awarded the 2017 ACM A.M. Turing Award, the highest distinction in computer science, in honor of his work with fellow honoree David Patterson on the reduced instruction set computing system (RISC) during the 1980s. And the honors haven’t stopped rolling in: Hennessy will receive the semiconductor industry’s top honor, the Robert N. Noyce award, this November, in recognition of his career accomplishments.

Still, it was fitting that Hennessy’s return to the Stony Brook campus came amidst these achievements and honors, since, as Hennessy tells it, Stony Brook played a central role in his career success.

“I still think of my graduate student days as some of the happiest days of my life,” Hennessy said. “I came in every morning energetic, excited to be there, and looking forward to what we might get done that day, to the conversations I would have with the faculty and my fellow graduate students.”

It was an outlook that stayed with him as he earned his master’s and doctorate, as he began his faculty career at Stanford in 1977, and as he began the MIPS (Microprocessor without Interlocked Pipeline Stages) project that led to the development of RISC processors. It also stayed with him as he ascended through Stanford’s administration as chair of the Department of Computer Science, Dean of the School of Engineering, Provost of the University, and eventually as President.

“Universities are about the people,” Hennessy said. “They’re about that incredible mixing of students and faculty.”

And, as Hennessy has entered the next phase of his career after stepping down as Stanford’s president in 2016, he has maintained a focus on the mix of students and faculty that made his own experience at Stony Brook and Stanford so meaningful.

Under a new agreement with Stony Brook, the funds from his share of the Turing Award will be used to establish the John L. Hennessy Endowed Professorship in Computer Science in the College of Engineering and Applied Sciences. The endowment will support the soon-to be-named professor’s research and other academic activities, including the professor’s graduate students, a cause near and dear to Hennessy’s heart, based on his own experiences.

“I desperately needed financial aid,” Hennessy said of his experience at Stony Brook. “I couldn’t go to graduate school, I couldn’t pursue my dream of getting a PhD without that financial aid.”

The establishment of an endowed professorship that will, in part, support graduate students, follows a long and distinguished record of donations to Stony Brook and the College of Engineering and Applied Sciences, including the Hennessy Endowed Graduate Fellowship Fund, to which Hennessy has donated more than $300,000 over the last five years.  It also follows Hennessy’s establishment of the Knight-Hennessy Scholars program at Stanford, the largest fully-funded scholars program in the world. The combination of the Knight-Hennessy Scholars program, the Hennessy Endowed Graduate Fellowship Fund and the John L. Hennessy Endowed Professorship in Computer Science sends a clear message that while Hennessy’s new role places him in one of the most powerful positions in global business, his passion for academia remains paramount.“John has left a legacy of excellence and singular achievement in each facet of academia he graced,” said Fotis Sotiropoulos, dean of the College of Engineering and Applied Sciences. “The best part is that he’s far from done creating his legacy. His passion for and commitment to educating future global leaders and entrepreneurs inspires us, and is exactly what we strive to emulate here at Stony Brook.”

As a former student of one of Hennessy’s close colleagues at Stanford, SUNY Chancellor Kristina M. Johnson has a unique appreciation for both the example Hennessy has set and how Stony Brook continues to excel in a field that was in its infancy when he arrived on campus.

“As one of the first graduate students in Stony Brook University’s Department of Computer Science, John set a precedent for what a SUNY STEM [Science, Technology, Engineering and Math] graduate is capable of achieving,” Johnson said. “He’s a giant in his field, in academia, and in business. He set the bar high for those who come after him, and I’m proud to say that the Stony Brook community of today has risen to that occasion.”

And, in adding to the University’s roster of endowed professors, Hennessy has helped ensure that Stony Brook will continue to live up to the legacy that he continues to grow.

“Endowed professorships provide the margin of excellence that enables Stony Brook to attract and nurture the brightest minds in fields of vital importance,” said Stony Brook University President Samuel L. Stanley Jr., MD. “We are immensely grateful to John Hennessy for both the example he has provided through his career achievements and his commitment to helping future generations of Stony Brook students build on those achievements for the betterment of our world.”