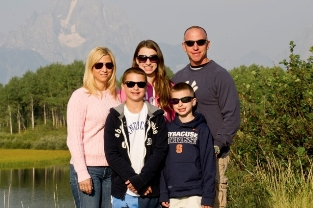 March 28, 2013 — Both parents of Stony Brook alumna Dawn Okst ’91 and two of her siblings earned degrees at Stony Brook University – an institution that Dawn considers a local treasure.

“We attended Stony Brook both because of its location and because it was a quality school,” she said.

Dawn and her husband David, parents of three and residents of Port Jefferson, believe in Stony Brook for another reason as well: it is home to Stony Brook Children’s Hospital and its Neonatal Intensive Care Unit (NICU), where their youngest child, Owen, was treated nearly 10 years ago.

“Owen was only in the hospital for a few days, but he received excellent care in the NICU,” explained Dawn, adding that it was clear at the time that the NICU as well as other pediatric spaces could benefit from expanded facilities. “Even though the care and the doctors were great, we were in a relatively small room with the other parents and babies.” Since then, the NICU has expanded four times the size and is the first NICU in New York State to offer all private rooms.

“Giving to Stony Brook Children’s made a lot of sense for us,” said David Okst. “It is the only hospital of its kind on Long Island, and it has a reputation for providing exceptional patient care. It made us feel good that we could be part of making it even better.”

Rather than designating their gift for the NICU or other specific purpose, the Oksts chose instead to leave the decision about how to use the money up to Stony Brook Children’s. At first reticent about receiving recognition for their gift, Dawn and David agreed to have the NICU Family Lounge named in their honor in order to motivate others to support the only children’s hospital on Long Island east of the Nassau/Queens border.

“We know that with the help of additional contributions, Stony Brook Children’s will be able to improve the facilities and continue to attract great doctors,” the Oksts agreed.

“It’s so gratifying whenever members of our community demonstrate their support for our services,” said Dr. McGovern. “Expanding our Children’s Hospital is a commitment we are making to the community and we appreciate its mutual commitment to us.”