Perpetuating the Legacy of Excellence of The Department of Surgery’s Past Chairman; Expanding Faculty 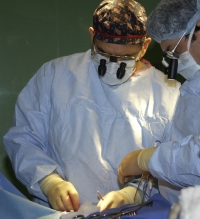 The decision to honor John J. Ricotta, MD, Professor Emeritus of Surgery, was based on his distinguished leadership during his tenure as Department Chairman from 1997 to 2008.

“During the course of his career, Dr. Ricotta has participated in the education of hundreds of medical students, surgical residents and vascular surgery fellows,” said Mark A. Talamini, MD, Professor and Chairman of Surgery. “In addition, he has recruited and helped mentor dozens of faculty members across multiple institutions. His involvement in the professional and personal development of physicians and surgeons remains the highlight of his academic career.”

As the leader of the Department of Surgery, Dr. Ricotta hired more than 50 full-time faculty members to build and expand the Department, including several current leaders who continue to distinguish the Department’s clinical and academic excellence:

Several of these physician-scientists are recognized as both national and international leaders in their fields.

About Dr. Ricotta, Dr. Tassiopoulos said, “John is a visionary in medical education. He was instrumental in Stony Brook becoming one of the first six institutions in the country to adopt an integrated five-year vascular surgery residency. This training paradigm is now the accepted practice nationwide.”

Dr. Ricotta has dedicated his professional career to the education and training of surgeons and to advancing the care of patients with vascular disease.

A native of Buffalo, NY, Dr. Ricotta was educated as an undergraduate at Yale University. He earned his medical degree and completed a surgical residency at Johns Hopkins University. Following his surgical residency, he completed a research fellowship in vascular surgery at Walter Reed, and was a registrar in thoracic surgery at Frenchay Hospital in Bristol, England.

Following his advanced training, Dr. Ricotta spent 20 years as a Professor of Surgery at SUNY-Buffalo School of Medicine and Biomedical Sciences in 1988, where he was Chief of Surgery at Millard Fillmore Hospital, founded the Department’s Division of Vascular Surgery and established a vascular surgery training program.

In 1997, Dr. Ricotta moved to Stony Brook University School of Medicine to serve as Chairman of the Department of Surgery, where he strengthened the Department’s clinical and academic performance and worked with faculty to revamp the Department’s educational programs.

As an academic surgeon, Dr. Ricotta has authored more than 250 articles and book chapters in all areas of vascular disease, and has lectured all over the world on all aspects of vascular care.

Currently, Dr. Ricotta is practicing as a vascular surgeon in Washington, DC, where he is Chairman Emeritus, Department of Surgery at Washington Hospital Center, and Professor of Surgery at both Georgetown University and George Washington University. In addition, he is a senior director of the American Board of Surgery.