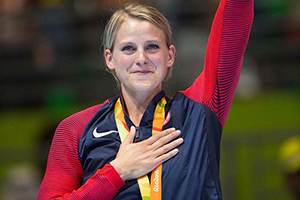 At the age of 11, Stony Brook graduate Lora Webster ’17 was diagnosed with osteosarcoma, a bone cancer that led to the partial amputation and reconstruction of her leg.

Her life was changed but her ambitions were undeterred.

Lora went on to pursue her academic, personal and athletic goals, including playing her favorite sport of volleyball at the highest level possible — as a Paralympian.

She faced her misfortune and turned it into an athletic prowess that is as inspiring as it was remarkable. She represented the U.S. in the Paralympic Games four times between 2004 and 2016. The games, which will be held again this winter in parallel with the Olympics in South Korea, bring together the top physically challenged athletes from around the world for several weeks of competition.

“I almost let fear keep me from one of the greatest opportunities I have been given,” Lora said. “We are given obstacles in life; we can either let them limit us or not pay attention to them.”

After learning the news of her cancer, Lora, who received her Bachelor of Arts in Sociology from the College of Arts and Sciences, was given two choices: She could either have a full amputation or undergo rotationplasty, a type of autograft where a portion of a limb is removed while the remaining limb is rotated and reattached.

Knowing that the choice would impact their daughter’s life forever, Lora’s parents allowed her to make the decision. She chose the rotationplasty. This gave her full range of movement, allowing her to continue playing sports. “I was always an athlete and I wasn’t going to let a cancer diagnosis change that,” Lora said.

The doctors removed the cancerous bone and her lower leg was rotated 180 degrees before being surgically reattached. She was later fitted for a prosthetic to be able to control movement of her leg. Lora says she has full feeling and usage of her leg as none of her muscles or nerves were severed. “Life may not look the way that I imagined it would look, but my life is so full of opportunities that I never imagined I would have.”

In her junior year of high school, Lora became a member of the Sitting Volleyball team in the U.S. Paralympics, which won Bronze in the 2004 in Athens, Silver in the 2008 in Beijing, Silver in the 2012 Paralympic Games in London, and Gold in the recent 2016 Paralympic games in Rio de Janeiro, where she was named “Best Blocker,” with 19 blocks and 38 rebounds.

She continues to play the sport that she loves with some modifications, such as using her hands to pass the volleyball. “Sitting volleyball can be more difficult than traditional volleyball,” Lora said. “As I play more and more, I realize how much of a fast sport it is.” Lora’s advice for kids facing some of the same challenges she did is to “not let your fears limit you.”

She explains that she was nervous to try sitting volleyball because she was afraid people would view her as “disabled,” and that would limit her for the rest of her life.

Training for the Paralympics is different from any other team Lora has been a part of. “It’s the highest level of competition so there is no room for laziness, but it is a tremendous challenge because our team is spread out throughout the United States,” Lora said.

“Team training camps are held once a month so the rest of the preparations we have to do on our own,” she said. “This requires us to hold each other accountable and push ourselves harder.”

Since there is no “off season” for Paralympic sports, it is mandatory for teams to attend training camps and competitions to compete for a roster spot.

Lora is inspired by her teammates. “As long as I can be a positive impact on the team, I want to compete,” she said. One of Lora’s former teammates from her Athens team will be competing on the Paralympic curling team in South Korea in March.

Although she’s a summer athlete, Lora says she will be glued to the TV to cheer on USA in the Winter Paralympics.

Since 2008, Lora has lived in Point Lookout, NY where she has raised 3 kids with the support of her husband Paul. Lora is a stay-at-home mom when she is not playing volleyball. She’s never let her disability detract from her experience of parenthood. Lora still trains with the team and will continue to do so for as long she can. “This sport has been a part of who I am for the last 15 years; as long as it works with our family, I would love to keep playing,” she said.

“Whether you are able-bodied, an amputee, or wheelchair bound, there is no limit on how you parent,” she said, explaining that her kids motivate her to stay in shape for volleyball when she is not competing. “They keep me active and focused so that when I get together with my team I can be as productive as possible.”

For Lora, life’s lessons are simple and clear. “Do what you need to do to be happy and live the life you want,” she said. “I never expected that I would be an amputee, but instead of letting that direct how I lived, I simply let it be a part of me and continued to live the way that I wanted to.

“Had I not embraced my new life, I would have been stuck in a place of limits and fear. Having cancer opened my life up to endless opportunities and I will forever be grateful for these opportunities.”