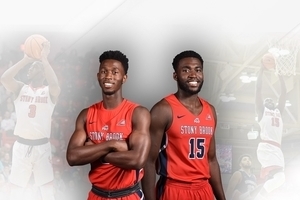 Olaniyi has started six of the last seven games for the Seawolves and is averaging 7.5 points nad 3.8 rebounds per game in his debut season. The Newark, New Jersey, native earned America East Rookie of the Week honors four times this season. He ranks third on the team with 31 steals this year.

Yeboah leads Stony Brook with 15.3 points per game, ranking seventh in the conference in scoring. The Chigwell, England native is top 20 in the league in rebounding as he paces the Seawolves with 5.1 per game. He has notched nine 20-plus point games in his sophomore season, leading the team in 15 of the 30 games this year.