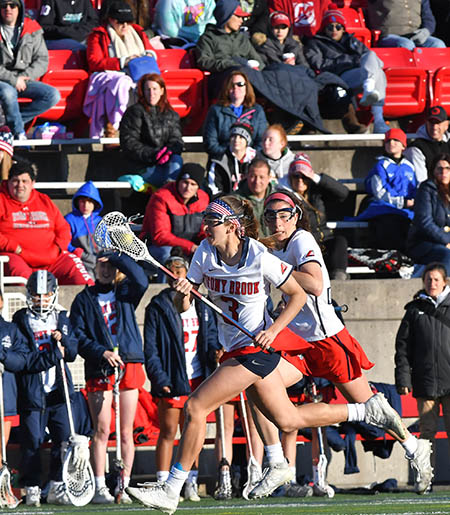 No. 1 Stony Brook women’s lacrosse earned its 10th straight victory to begin the 2018 season on Tuesday night at LaValle Stadium, topping No. 23 Cornell by the final score of 19-4.

With the win, the No. 1 Seawolves (10-0, 3-0 AE) have now recorded six wins vs. nationally-ranked opponents so far this season.

“This was a game we had circled, a team we had played in the fall and we knew they were a quality opponent,” head coach Joe Spallina said.

“I thought Cornell was gritty and hard-nosed tonight,” Spallina added. “I knew they had our team’s full attention, and I felt that we were prepared and locked in for this one. I’m really proud of the way our group played again today, it was another great win.”

The Seawolves are back in action on Thursday, April 5, traveling to Hartford for an America East contest.