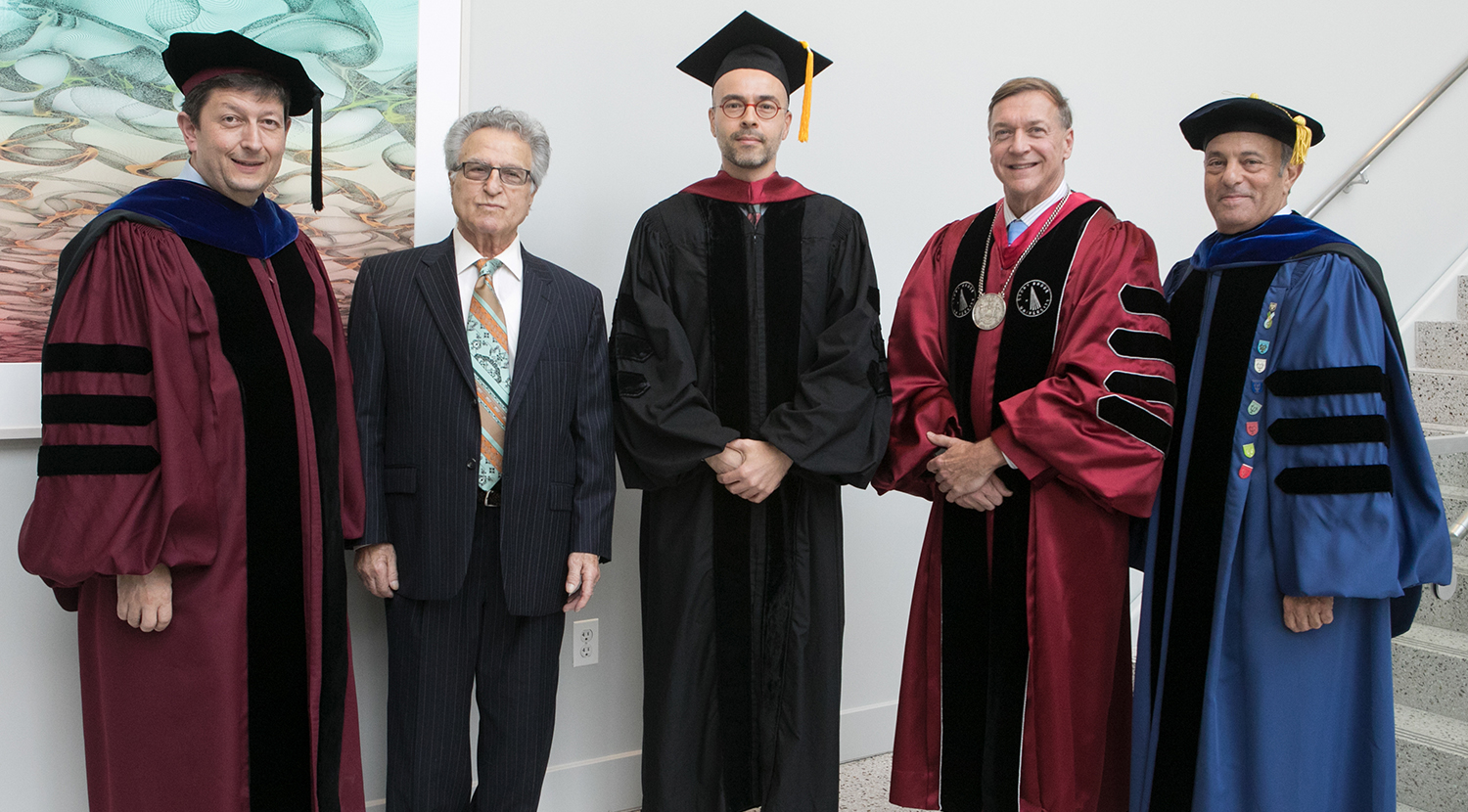 The ancient Greek civilization is the foundation of Western society. In recognition of its rich history and culture, and the crucial part it’s played in shaping the modern world, the Stony Brook community came together on November 9 to celebrate the formal installation of Nikolaos Panou, PhD, the inaugural Peter V. Tsantes Professor in Greek Literature and Language.

“It is an understatement to say that I am delighted that Nikolaos Panou has been named to this distinguished professorship,” said President Samuel L. Stanley Jr. during the ceremony. “And we are grateful to Peter V. and Despina Tsantes for endowing this professorship. It will be a lasting tribute to the Tsantes family and enable us to continue to attract and retain prominent scholars in the field of Hellenic studies.”

As Assistant Professor of Comparative Literature in the College of Arts and Sciences, Panou’s current research focuses on the ways in which power and authority were conceptualized and represented in pre-modern philosophical discourse, with particular emphasis on moral and political works written from the 16th to the 18th century.

President Samuel L. Stanley Jr. explained that it is a Hellenic tradition of rigorous investigation of the hard sciences, social sciences and humanities that Stony Brook seeks to emulate, promulgate and celebrate.

“It is not only fitting, it is important that at Stony Brook — one of the top 62 research Universities in the country known for our emphasis on the study of science, technology, engineering, mathematics and medicine — we also educate and nurture students with the values of Hellenic civilization,” he said.

Recognized for his long history of visionary generosity in providing valuable resources and leadership among Greek communities, Long Islander Peter V. Tsantes’ passion and enthusiasm was encouraged by Stony Brook’s own educational reputation and commitment toward advancing the study of Hellenic culture. He also noted that he and his family have dedicated the professorship to the memory of his adoptive mother who sponsored his trip to the United States in 1951, Aikaterini Spanou Haralambou Batuyios. “How can you forever show your love and remembrance?” Tsantes’ said of Batuyios.

Throughout Tsantes’ life, Batuyios encouraged him to give back, which led to his involvement in the American Foundation for Greek Language and Culture (AFGLC). Before long, he turned his philanthropic focus closer to home, where he formed the New York Chapter of AFGLC. He currently serves as treasurer for its executive board.

To Tsantes, the professorship was a fitting tribute to not only his adopted mother and homeland, he hopes it will spur others “toward an increased energy in philanthropy and education.” The professorship, he believes, will be the base for a plethora of Hellenic activities on campus, supported not only by his family, but also by the generosity of other members of the Long Island Hellenic community.

As holder of the professorship, Panou is invested in promoting scholarship, teaching and research in all aspects of Hellenic civilization, from Antiquity to the present.

One of Panou’s principal goals is to build a stronger Center for Hellenic Studies that will serve as a forum for the study of Greek society, history and culture, and which will cultivate a comprehensive understanding of classical, post-classical and modern Greece.

“The vision is here, and so is the will, the determination and the expertise,” Panou said. “We now have to direct all of our effort — and with a great sense of urgency, I might add — to the creation of a robust, radiant, magnetic Center for Hellenic Studies that will serve as a hub for the study of Greek society, history, politics and culture that will become an indispensable point of reference within Stony Brook and beyond.”

This new professorship is yet another example of how endowed faculty build on the University’s dedication to excellence across campus. That’s why one goal of the $600 million Campaign for Stony Brook is to create a total of 100 endowed faculty positions by 2018, aimed to attract more eminent scholars and researchers and retain outstanding faculty across a wide range of disciplines.

“At a time when the humanities are being increasingly marginalized, to say the least, the establishment of an endowed chair in Hellenic studies is an event and an opportunity of singular importance,” Panou said. “The truth is, what’s happened here at Stony Brook is the result of extraordinary actions that require inspiration, zeal, commitment, generosity and a lot of hard work.”