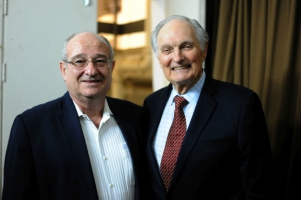 In a country of just 9 million people, Israel has quickly become one of the world’s true scientific powerhouses. The country ranked 10th in this year’s Bloomberg’s Innovation Index, ahead of the United States, and Israeli innovations in fields ranging from water desalination to cybersecurity to clean energy have been hailed as having transformative power around the world.

However, while Israeli science and technology are booming, the communication of science in Israel — the capacity for the country’s scientists to share their work with the public — is still in its nascent stages. It is important that the country’s scientists are able to communicate with funders, policymakers, and the public to effectively explain and promote the advantages of science to society. Effective communication has myriad potential benefits, including informed policy decisions that promote further scientific development, and stronger scientific literacy among the population as a whole.

The Alan Alda Center for Communicating Science at Stony Brook University is responding to this need through a new partnership with the Zuckerman Institute, an operating foundation founded by Mortimer B. Zuckerman, called the Zuckerman Institute-Alda Center Scholars Project. By training a cohort of scientists in Israel — the Zuckerman STEM Leadership Program scholars — in the Center’s acclaimed Alda Method™, the new program will provide Israeli scientists with the tools to communicate effectively while providing valuable, measurable data for the Alda Center itself.

“The Zuckerman Institute-Alda Center Scholars Project is one more example of the boundless opportunities Stony Brook is able to create across the University with the help of our philanthropic supporters,” said Stony Brook University President Samuel L. Stanley Jr., MD. “The opportunity to strengthen the Alda Center’s revolutionary curriculum will translate to powerful benefits for the Center and those it serves, both on our campus and in the scientific community around the world.”

“One of the happy surprises in our work teaching better communication has been that not only do policy makers and the public have a better understanding of science, the workshops also improve collaboration among scientists themselves,” said Alan Alda, who addressed the Zuckerman Institute-Alda Center Scholars as part of the program’s inaugural two-day pilot workshop on February 21 and 22. “The dynamism and creativity of these two countries will only increase. We’re honored to help make that happen.”

“The Alan Alda Center for Communicating Science impressed us with its innovative ways of helping scholars and scientists explain their work more clearly to others,” Zuckerman Institute Trustees James Gertler and Eric Gertler said in a statement. “Our hope is that our Zuckerman STEM Leadership Program scholars leverage this two-day workshop experience into a lifetime of scientific collaboration and communication — first to their fellow students, professors and colleagues and then to the public at large.”

For Stony Brook and the Alda Center, the partnership with the Zuckerman Institute and scientists from major universities such as Technion and Weitzman represents a valuable opportunity to study the efficacy of the Alda Method™ in an international setting over a period of two years, leading to publication in peer-reviewed journals and further refinement of the Alda Center’s science communication curriculum.

“The Zuckerman-Alda partnership gives us the chance to extend our model to colleagues in Israel and to build on the experience we’ve had in the U.S.,” said Laura Lindenfeld, director of the Alda Center. “We are very excited to be given the opportunity to conduct trainings and assess how they are working in Israel. This experience will help us strengthen our curriculum and our international science communication training in the future.”

The Zuckerman Institute-Alda Center Scholars Project is part of the Campaign for Stony Brook, a $600 million fundraising effort and the largest in SUNY history. To date, more than 46,500 people have donated over $584 million. Make a gift today in support of your interests and help Stony Brook effect powerful change on Long Island and around the world. What are you passionate about? Give today.