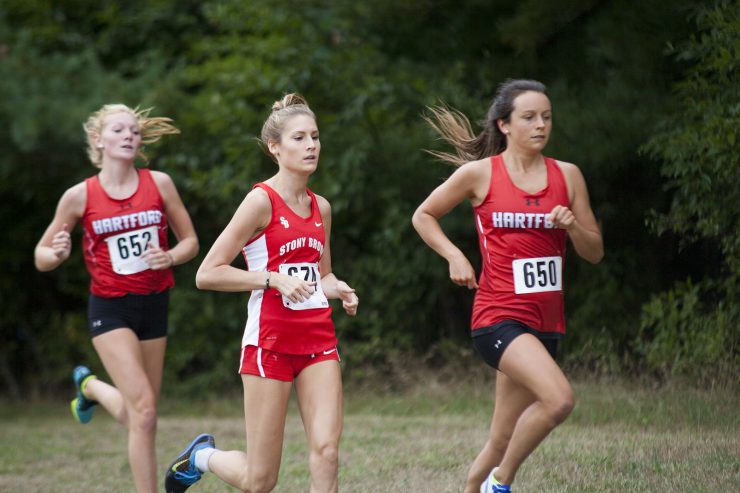 The Stony Brook men’s and women’s cross country teams both came in second place at the America East Championships on Saturday, October 27 in New Hampshire.

“We knew that UMass Lowell would be ready to compete hard today, even though their season to this point had not gone as they hoped. Over the last three years we have been involved in close finishes, we came out on the right side in two, this time UMass Lowell finished the job better than we did,” head coach Andy Ronan in a press release after the races. “Cameron and Vann ran well up front for us and Darian had a great race, but a couple of the guys were just a bit off-pace today and that cost us.”

“We really wanted to take this title today but we came up against a strong Albany team. The ladies battled hard the whole way, but just could not break up Albany’s pack, plus Vermont women also had a good day and they fought hard to over take us in the last mile, but we did come on the right side of that battle. Annika put up a very good challenge for the individual title and I thought Tiana competed very well considering she entered the meet with a very sore heel,” Ronan said in a press release. “Like the guys and the girls did not win the battle in the middle positions, partly because the other teams competed hard but also because one or two athletes fell short of their best performances today.”

Ronan, along with assistant coaches Jason Headman and Howard Powell, won Coaching Staff of the Year for their efforts on the women’s team.

Ronan finished off by saying, “We are disappointed, but can’t feel sorry for ourselves too long as we have the regional championships in less than two weeks.”

The Seawolves return to action when they travel to the NCAA Regional Championships in Buffalo on Friday, November 9.