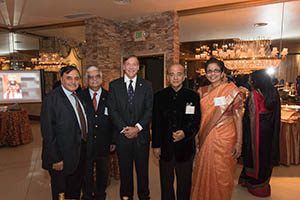 More than 250 members of the New York Indian American community and Stony Brook University attended the 20th Anniversary Gala of the Bishembarnath and Sheela Mattoo Center for India Studies in Great Neck on October 29.

This event, attended by many esteemed guests including Stony Brook President Samuel L. Stanley Jr., U.S. Congressman Raja Krishnamoorthi and Consul General of India Sandeep Chakravorty, celebrated the remarkable growth and success of the Mattoo Center for India Studies as well as its ambitions for the future of India studies at Stony Brook and beyond.

“We need more Centers like this to train the new generation of Indian American leaders to swell the “Samosa Caucus” in the Congress,” said Congressman Krishnamoorthi, referring to the group of Indian Americans in the House and Senate. He said that in the short span of two decades, the Mattoo Center’s accomplishments far exceeded expectations, making this a national model.

The Center, founded in 1997, began two years earlier when 700 students petitioned the University for India-related courses. Professor S.N. Sridhar and his wife and colleague, Professor Kamal K. Sridhar worked with the students, faculty, administration, and the community to build the Mattoo Center for India Studies, now a renowned academic center and community asset, with a rich array of offerings, such as the distinguished lecture series, performing arts series, scholarships, and outreach programs.

In addition to over 30 courses per year on India studies from linguistics and literatures to history and politics, the Center supports a bachelor’s degree major and minor. A major reference volume, Ananya: A Portrait of India, was developed by Center faculty and features articles by leading intellectuals and authorities on India. Additionally, the Center has been featured in international news reports and mainstream media outlets and has been a primary resource for television documentaries such as PBS’s Asian Indians in America. Recent research endeavors include translation of the Mahabharata into English, to be published by Harvard University Press.

The acceleration from vision to reality was made possible through the deep commitment and generous investments of the Indian American community. Stony Brook University is the recipient of the largest gift ever made to a U.S. public university for India studies. A donation of $1.25 million from Dr. Nirmal K. Mattoo, a leading nephrologist and Chairman of Stony Brook’s Center for India Studies Executive Committee, and a $1.25 million permanent endowment from members of the New York area Indian American community were matched with $2.5 million from the Simons Foundation Challenge Grant creating a remarkable impact of $5 million.

The endowment has already resulted in a number of initiatives. Sacha Kopp, Dean of the College of Arts and Sciences, announced the appointment of an outstanding philosopher, Professor Arindam Chakrabarti, as the first holder of the Mattoo Chair in Classical Indic Humanities. The Arya India Studies Library was dedicated last September. The Krishna Gujavarty Seminar series has already hosted three seminars. The Kakani lecture series, the Sudesh and Sudha Mukhi fund for Vedic studies and music, the S.N. and Kamal Sridhar fund for teaching and research are also yielding results.

“These generous gifts from Dr. Mattoo and the local Indian American community have built a solid foundation for growth of India Studies at Stony Brook,” said Stony Brook University President Samuel L. Stanley Jr., MD. “Because of their support, the Mattoo Center is increasingly recognized as an academic and cultural center of excellence in India studies, both nationally and internationally.”

Founding director S.N. Sridhar outlined the Center’s vision for the future at the Anniversary Gala including exploring the viability of an interdisciplinary PhD program in India Studies, developing a robust research program to deepen and disseminate knowledge about India’s rich contributions to human knowledge and welfare, and increasing promotion of India’s regional and heritage languages and cultures.

Sridhar noted Stony Brook’s place among top institutions in responding to this need for increased academic research and teaching in this discipline. “Other major universities from Berkeley to Harvard have been investing in India studies programs, recognizing that India has played a significant role in developing knowledge systems in a wide range of disciplines from ancient times and its current importance as a major player in an increasingly interdependent global economy and world order.”

“The study of India, one of the great classical civilizations of the world, is a wonderful complement to one’s education and strengthens cross-cultural understanding as the new global economy and community continues to become ever more interdependent,” said Dr. Mattoo, “At Stony Brook, the India Studies Center contributes to the vibrant campus community adding to the diversity of perspectives that make up a rich intellectual environment.”