Matt Senk: The Steady Hand in the Swift Growth of Stony Brook Baseball 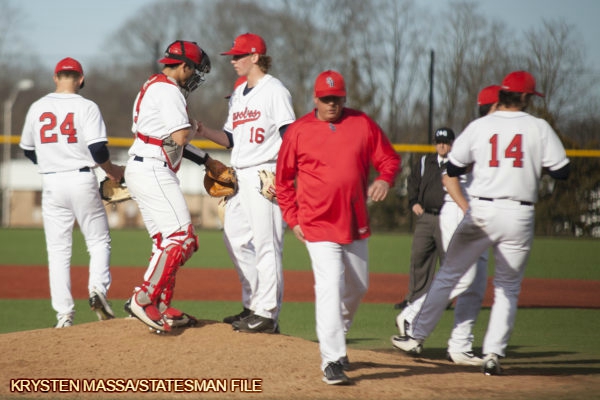 First year head coach Matt Senk began coaching Stony Brook Baseball, then a Division III program, in 1991. The program and it’s facilities were in rough shape. His team played with a large “mound” between second base and right field. Scott Schermansky was a short-statured right fielder; the team had trouble seeing if he completed catches.

“The only way you knew was when the infielders confirmed, ‘yeah, it’s a good catch,’” Senk said. “You could barely see him from the dugout. That’s just kind of example of what kind of condition the field was in.”

More than a quarter-century later, Senk is still coaching the team. He has led the growth of the program from Division III to Division I in 2002, developing it into a stable contender in the America East. The Seawolves garnered national attention when they defeated LSU before reaching the College World Series in 2012.

Due to the continued growth of the program, Stony Brook’s Director of Athletics Shawn Heilbron recently announced intentions to invest in a new baseball/softball complex that will allow the team to host a future NCAA Regionals, for which lights are required.

The university took a risk when they hired a coach with no collegiate coaching experience, and Senk took a risk by leaving a stable job.

“If I’m going to do this I am going to have to take a leap of faith and go,” Senk said of his mindset. “I left a full time coaching-teaching position [at Kellenberg Memorial High School in Uniondale, New York] to be full-time here.”

Attracting talented recruits as a new coach of a Division III program is difficult. Recruits often passed on Stony Brook in favor of more established schools. Senk needed to build a recruiting base from scratch.

A former college teammate of Senk’s at SUNY Cortland was an assistant coach at Pine Bush High School in Pine Bush, New York at the time. He told Senk that he had a kid named Joe Nathan who was undersized but had been heavily under-recruited. “He is going to be big-time someday,” he said, and Senk listened to the advice, and eventually convinced Nathan to play for the team.

“First practice I hit a grounder to him and he threw an absolute rocket across the diamond,” Senk said. “I don’t know that we evere had anyone that had an arm like Joe had, and that was when we were Division III.”

He called Nathan, then a shortstop, into his office the next day and had one question to ask: “Explain to me again why you don’t pitch.”

Nathan became the first program alum to reach the Major League level in 1999. He began his career with the San Francisco Giants in 1999 as a starting pitcher before joining the Minnesota Twins. He became the team’s closer in 2004 and remained in the role until 2011, becoming the franchise’s all-time leader in saves. He is also eighth on the all-time career saves list with 377.

Nathan was just the first of four Stony Brook alumni to play in the Major Leagues and the first of 23 players to be drafted since Senk took over the program. Tom Koehler, who graduated in 2008, is a pitcher for the Miami Marlins and has made 20 or more starts in each season since 2013. Nick Tropeano is a starting pitcher for the Los Angeles Angels who has 119 strikeouts in his first 127 big-league innings. Travis Jankowski plays outfield for the San Diego Padres, becoming the first position player from Stony Brook to become a Major League Baseball player.

However, the team’s historic success has not relied solely on future Major League talent. Senk’s teams are routinely sharp in the field. They have led the America East in fielding percentage in all but one season since 2010. He may not be coaching at UCLA or Florida, but Senk has been with the program long enough that he has created a culture of winning.

His success reached its paramount in 2012 when the team defeated longtime baseball powerhouse, LSU, in a three-game series to advance to the team’s first College World Series appearance – an LSU team that rostered future Major League starting pitchers Aaron Nola and Kevin Gausman. Jankowski won the America East Player of the Year that season, prior to being drafted in the first round of the MLB Draft.

“Being underdogs going into Alex Box Stadium with 14,000 loud LSU fans was not easy to do,” Jankowski said. “But we were composed. It wasn’t anything out of reach or anything that was an obstacle that we couldn’t overcome.”

Jankowski generated buzz the previous summer for winning the Cape Cod League MVP Award in the summer of 2011, an honor MLB players such as Thurman Munson, Paul O’Neill, Evan Longoria and A.J. Pollock have also received. The buzz generated from Jankowski and the team’s strong 2011 season had attracted about 15 scouts to attend each game. Baseball America even came to Stony Brook to interview Jankowski.

“There was a lot of success that preceded that and a lot of great players,” Senk said. “It helped put Stony Brook University on the map.”

Former starting pitcher Tyler Johnson, who out-dueled future Baltimore Oriole Gausman in a game-two win against LSU, believes his head coach went through a coaching transformation during the run. Senk fostered a strong bond with the team, entrusting his guys and not taking too much control of the game, as other coaches may do.

“We just all had so much respect for the guy to begin with, but we just had a really good core group of guys [in 2012] who could do it ourselves,” Johnson said. “Sometimes it’s best to sit there and just let guys play. We could have been playing well and he could have been doing all different stuff but he didn’t. I think it takes someone who has been coaching a long time to understand that.”

In addition to the team’s proven track record, the trust and loyalty that Senk has in his players is what attracts players to his program. Chad Lee, a 2016 graduate and former starting pitcher, described Senk as a coach who has a great balance of knowing when to fire up his players and when to be calm and trust them.

“Sometimes when I was in a tough spot he would come out to the mound but wouldn’t even say anything,” Lee said, contrasting Senk from other baseball coaches. “He would just stand there calmly.”

Lee had originally been recruited by Stony Brook out of California. He committed to Stony Brook during the fall prior to the 2012 College World Series run. The run itself helped the team gain validity around the country, allowing the team to attract more coveted recruits from out of state.

The team has recruited several players from Ontario since the 2012 run such as senior center fielder Toby Handley who was drafted by the Houston Astros in 2016. They were also able to recruit New Jersey-native Michael Wilson, who was drafted in the fifteenth round by the Red Sox during last year’s draft. Wilson is the highest drafted player to ever get drafted before beginning his Stony Brook career.

“Mike is clearly a very good hitter. I think that’s why the Red Sox drafted him,” Senk said. “We are really pleased with what he is doing and there is no reason why he can’t keep that up.”

Senk has been the catalyst of Stony Brook Baseball’s growth in his 27 years as the head coach. Turning a Division III program into one that snatches MLB prospects from the Red Sox is a testament to the winning and professional culture that Senk has developed, and is continuing to develop, at Stony Brook.