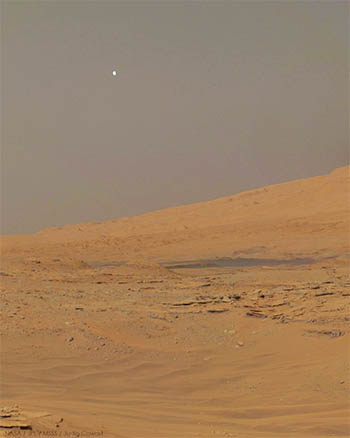 A fresh look at 20-year-old data from the Mars Global Surveyor mission lends support to the idea the moons of Mars formed after a large impact on the planet threw a lot of rock into orbit, according to a new study led by Timothy Glotch, associate professor in the College of Arts and Sciences Department of Geosciences. The study is featured in the Journal of Geophysical Research: Planets, a publication of the American Geophysical Union.

The dataset held unplumbed clues to the stuff Phobos is made of, which may be more similar to the crust of the Red Planet than it appears, according to the study’s authors. The weird shapes and colors of the tiny Martian moons Phobos and Deimos have inspired a longstanding debate about their origins.

“The fun part for me has been taking a poke at some of the ideas out there using an old dataset that’s has been underutilized,” Professor Glotch said.

Dark objects
The debate over the origin of Mars’ moons has split scientists for decades, since the early days of planetary science. In visible light, Phobos and Deimos look much darker than Mars, lending weight to the adoption hypothesis.

Scientists study the mineral composition of objects by breaking the light they reflect into component colors with a spectrophotometer, creating distinctive visual “fingerprints.” By comparing the spectral fingerprints of planetary surfaces to a library of spectra for known materials, they can infer the composition of these distant objects. Most of the research into the composition of asteroids has examined their spectra in visible light and in near-infrared light, which is just beyond human vision on the red side of the visible spectrum.

In visible and near-infrared light, Phobos and D-class asteroids look much the same—that is, both their spectra are nearly featureless because they are so dark. D-class asteroids are nearly black as coal because, like coal, they contain carbon. This dark aspect of Phobos led to the hypothesis that the moon is a captive asteroid that flew a little too close to Mars.

But scientists looking at the orbits of Mars’ moons argued they could not have been captured. These scientists believe the moons must have formed at the same time as Mars, or resulted from a massive impact on the planet during its formative millennia.

“If you talk to the people who are really good at orbital dynamics and figuring out why certain bodies orbit the way they do, they say that, given the inclination and the details of Phobos’ orbit, it’s almost impossible that it was captured. So you have the spectroscopists saying one thing and the dynamicists saying something else,” Glotch said.

Heat fingerprints
Glotch decided to look at the problem in a different light: the mid-infrared, which is in the same range as body temperature. He looked at the heat signature of Phobos captured in 1998 by an instrument he describes as a fancy thermometer carried on the Mars Global Surveyor. The robotic spacecraft spent most of its lifetime looking down at Mars, but took a quick look at Phobos when it passed near the moon before settling into a closer orbit around the planet.

Heat energy, like visible light, can be split into a spectrum of “colors.” Even objects that look black in visible light may glow in a distinctive infrared spectrum. Although Phobos is very cold, its heat spectrum has a discernable signature.

Glotch and his students compared the mid-infrared spectra of Phobos glimpsed by the Mars Global Explorer to samples of a meteorite that fell to Earth near Tagish Lake, British Columbia, which some scientists have suggested is a fragment of a D-class asteroid, and other rock types. In the lab, they subjected their samples to Phobos-like conditions of cold vacuum, heating them from above and below to simulate the extreme changes in temperature from the sunny to the shady sides of airless objects in space.

“We found, at these wavelength ranges, the Tagish Lake meteorite doesn’t look anything like Phobos, and in fact what matches Phobos most closely, or at least one of the features in the spectrum, is ground-up basalt, which is a common volcanic rock, and it’s what most of the Martian crust is made out of,” Glotch said. “That leads us to believe that perhaps Phobos might be a remnant of an impact that occurred early on in Martian history.”