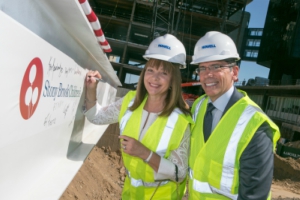 Of all the newborns to receive specialized care in the Stony Brook Children’s Hospital Neonatal Intensive Care Unit (NICU), nearly 100 per year have a birthweight of 3 pounds or less. At that size, head circumference is often no larger than an orange, hands can barely grip an adult thumb and a foot — when birth weight hovers just over 1 pound — can be as small as a penny.

In support of this tradition of excellence, Jim Breslawski, President of Henry Schein, Inc., and his wife Debbie have graciously donated $100,000 to the Stony Brook NICU Skills Lab, a facility designed to train nurses and physicians who care for the sickest babies.

“As a regional resource, Stony Brook Children’s NICU is responsible for delivering the highest level of neonatal care and educating the next generation of neonatologists,” said Margaret McGovern, MD, PhD, Stony Brook Children’s Hospital physician-in-chief and inaugural Knapp Chair in Pediatrics. “The Breslawski family’s support will allow us to expand our educational programs and continue our tradition of excellence in teaching.”

With the Breslawski’s infusion of funds, the Lab will incorporate the newest technology that creates real-time situations that pediatric clinicians experience in day-to-day care of premature newborns.

“Our family has enjoyed supporting Stony Brook Children’s for years,” Debbie Breslawski said. “Giving back brings us closer to the community and we’ve always been proud to have such a prestigious institution in our backyard. We’re pleased to support the needs of the NICU Skills Lab and are happy to support a department and hospital that plays such a vital role for the community’s most vulnerable.”

“The Breslawski commitment means a greater amount of training and expertise in a department already leading in neonatal medicine,” said Dexter Bailey, senior vice president for University Advancement. “Their compassion and generosity will lead to a more family-centered and medically advanced department that’s in service to the smallest and weakest among us; they can never receive too much support.”

In honor of cumulative support, they will be recognized on the new Stony Brook Children’s donor wall. The Breslawski Family Triage Station was also named in recognition of their previous $100,000 gift to Stony Brook Children’s, the impact of which was doubled by an anonymous donor’s matching challenge.

Their gifts count toward The Campaign for Stony Brook, a $600 million fundraising effort and the largest in SUNY history. So far, more than 44,000 people have given over $562.9 million in support of groundbreaking research.

Make a gift today in your area of interest and help affect change on Long Island and around the world.