Kylie Ohlmiller Nominated for 2018 NCAA Woman of the Year Award 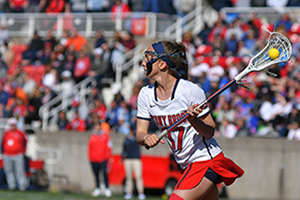 Stony Brook women’s lacrosse graduate Kylie Ohlmiller (’18) has been nominated for the 2018 NCAA Woman of the Year award, the organization announced this afternoon.

Ohlmilller, who has already been named America East Woman of the Year, recorded a nation-leading 157 points in 2018, helping Stony Brook achieve its first No. 1 national ranking in program history. She was selected as America East Offensive Player of the Year, has been tabbed an IWLCA All-Region First Team player, and was selected as an Inside Lacrosse Division I All-American last week. Ohlmiller finished her four-year career with the Seawolves posting an NCAA-record 498 points and 246 assists. She also owns the NCAA single-season record for points (164) and helpers (86).

The Islip-native was selected as a 2017 and 2018 Tewaaraton Award finalist during her time with the Seawolves. She graduated with a 3.24 GPA majoring in sociology, and is devoted to several youth lacrosse initiatives including Play It Forward and Challenger Lacrosse.

For 28 years, the NCAA Woman of the Year award has honored academic achievements, athletics excellence, community service and leadership of all graduating female student-athletes. The Committee on Women’s Athletics will select the 2018 NCAA Woman of the Year, which will be announced on Sunday, Oct. 28 at an awards dinner in Indianapolis.