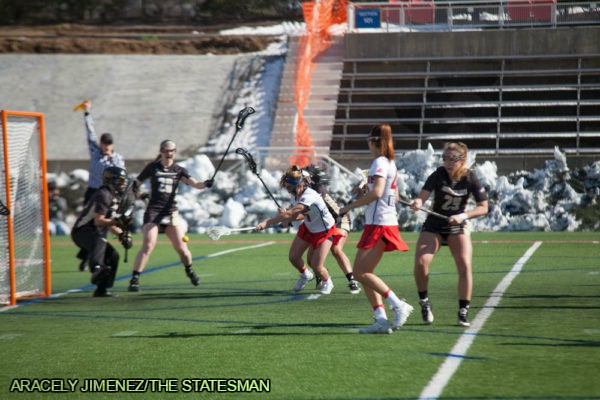 Junior attacker Kylie Ohlmiller recorded her third assist on Friday after junior midfielder Samantha DiSalvo with 4:55 left in the first half. That assist gave her 150 points on the year, which broke Maryland’s Jen Adams’ 16-year record of 149 points in a single season. Ohlmiller ended her day with three goals and three assists, extending her point total to 151.

“Whoever is playing her has that dream matchup,” Stony Brook Women’s Lacrosse head coach Joe Spallina said. “What she’s done this year is in true Michael Jordan fashion. She makes the players around her better.”

The theme of the Seawolves’ first round matchup against the Bryant Bulldogs was simple – breaking records. Career-highs and shattering records defined the 21-6 win for Stony Brook Friday evening at Kenneth P. LaValle Stadium.

“No. The record wasn’t on my mind,” Ohlmiller said about her record-breaking performance. “It was nice to hear it over the loudspeaker, but the game was close, so our mindset was on the rest of the game.”

Senior midfielder Dorrien Van Dyke led all scorers with seven goals on nine shots. Seven goals is her new career-high, but she attributes her success to her teammates.

“I was just seeing the net really well,” Van Dyke said. “Of course, I got some great feeds from my teammates so I couldn’t have scored that many goals without them today.”

The game was up for grabs for both teams early in the first half. The Bulldogs were down 5-4 with 17:48 remaining. Sophomore attacker Jess DeMeo scored three of the four goals for Bryant at that point.

After a competitive start to the game, the Seawolves went on a 10-0 run, causing Bryant to fade into the background.

“I thought at first we were pressing too much. We were trying to make the perfect play. We just had to settle down at some point,” Spallina said. “I thought [senior midfielder] Kristin Yevoli was outstanding, especially in the first half. [Freshman midfielder] Ally Kennedy as well, I thought she was going really well too.”

Yevoli had three goals and an assist and Kennedy had one goal.

Stony Brook was dominant in all aspects on the field. They beat Bryant in multiple statistical categories, including shots, ground balls and free position shots. One stat stood out above all – draw controls. The Seawolves won that battle 22-7, and sophomore midfielder Keri McCarthy was the catalyst.

The sophomore said how important draw control is, and how it is emphasized in practice.

“I think we harp on the draw a lot,” McCarthy said. “We practice it a lot. And that record, yeah I’m happy. It’s something to have, but it’s definitely more on my teammates just pushing me each and every day on the draw.”

The Seawolves put up 21 goals in the contest, surpassing the 20 goal mark for the first time this season. The team scored 20 goals on six different occasions, but this was the first time Stony Brook scored 21 goals since March 2013, in a game against Iona.

While the seeding issue for the team has been a hot topic of discussion, the 14-goal win was a statement to the committee for the Seawolves. Spallina, however, is ready to move on from that issue.

“I don’t care anymore,” Spallina said. “Crying over the seeding thing, it doesn’t matter to me. I don’t care about the bracket anymore. The only thing I want to see is Stony Brook here, then [the second round] and so on.”

No. 8 Stony Brook will face Northwestern on Sunday at LaValle Stadium at 12 p.m.. Northwestern defeated Albany 15-7 in their first round matchup.