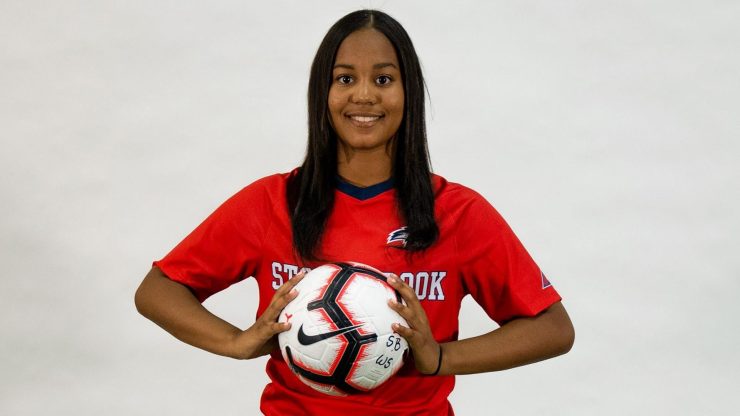 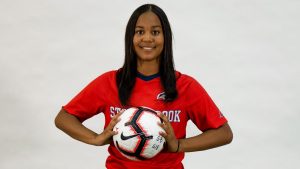 Scrolling through social media, Kristina Garcia found the news that she’d be returning to the pitch for the first time in over a year and it would be to represent her country.

The Great Neck, N.Y., native is one of 57 headed to the Dominican Republic training camp ahead of the 2022 CONCACAF W Qualifiers, the first step on the road to the 2023 Women’s World Cup in Australia and New Zealand.

“I was looking through the names thinking I probably wouldn’t be on the list,” the freshman remembered. “I saw my name and actually just went blank. I had no idea at all.”

From there, selections will be made for the nation’s gameday rosters during its run through FIFA Women’s World Cup qualifying.

The Road to Australia-New Zealand begins in February for most countries, with qualification for the 2022 CONCACAF W Championship on the line in four international contests. The DR will play Grenada and the Cayman Islands on February 16 and 19, and then take on Bermuda and Jamaica on April 8 and 12. The top team in each group will advance to June’s Championship.

“I started coaching Kristina when she was 15 and it’s really impressive to see where her hard work has brought her,” Stony Brook head coach Tobias Bischof said. “Representing the Dominican Republic at the youth and senior level is a great achievement.”

Garcia has national team experience to her name already, playing for the senior team during its Olympic qualification for Tokyo 2020, but made history with its U20 squad a year later.

Hosting the 2020 CONCACAF Women’s U-20 Championship, Garcia’s Dominican Republic were underdogs in a group with the United States, Honduras and Cuba.

“I remember there were a lot of reporters saying we weren’t going to make it out of the group,” she recalled.

They responded by thrashing Honduras, 7-0, in the opening match. Garcia was one of the goalscorers, firing home a 13th-minute tally.

Garcia added another goal in the quarterfinals, a 2-1 win over Jamaica, that secured a semifinal spot. It is the furthest that any Dominican national team has gone in international competition at any level.

The midfielder spent the fall rehabbing a leg injury but is ready to go whenever her name is called in 2022.

“I’m really confident in everything I’ve been doing,” she said. “I don’t think I’ve ever worked out this much in my life. I’ve had to do extra lifts and extra running and I think all of those little things will definitely help me. The soccer part will come back to me and now I just have to prove it on the field.”

After this trip, she’ll be back with the Seawolves as she looks to make her Stony Brook debut in the fall.

“She’s a really hard worker and I’m looking forward to integrating her into our team this spring season,” Bischof added.