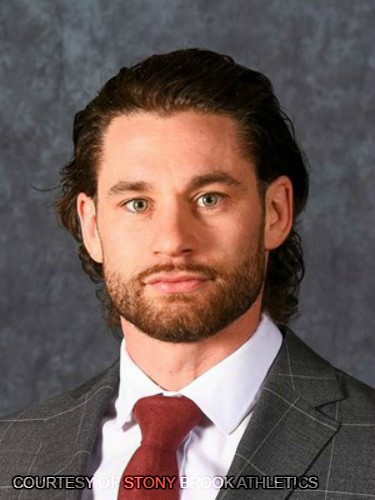 Professional boxer Chris Algieri has always had a focus on nutrition and healthy eating. Then an amateur wrestler and student at Stony Brook University, he graduated in 2007 with a degree in healthcare science and a plan to pursue a master’s degree in the same field in order to educate others on how to eat well.

And while he did in fact get his master’s from NYIT in 2010, his career as a nutritionist did not begin; that plan was derailed by a lucrative professional boxing career, one that saw him face off for the World Boxing Council (WBC) welterweight title against Manny Pacquiao in 2014.

For Algieri, learning about dieting and nutrition helped him flourish as a boxer. He posted an overall professional record of 21 wins and three losses. Now Algieri works as the main nutritionist for Stony Brook athletes. His job entails working out with all the Seawolves and teaching them how to help their bodies stay healthy.

“It’s great to be back here,” Algieri said. “Stony Brook was a second home to me. I was excited to be given the opportunity to come back and work in this new and growing program.”

Algieri was hired in 2016, soon after his final professional boxing fight in February of that same year. Since then, he has slowly built his nutrition program up, as he has been the only one to boast the title of nutritionist at Stony Brook University.

“My job and this nutrition idea are only about a year old,” he said. “So right now, of course I see this program getting bigger. I’m the only person in my ‘department,’ but I hope to have others work under me as well at some point. That way, each sports team here at Stony Brook will have their own nutritionist to work with them during the season and the offseason.”

His office, stationed in the Dubin Family Athletic Performance Center, keeps him in close proximity to all the athletes.

“I work with all the athletes,” he said. “We work out together, or I speak to them during a practice. I show them what to and how much to eat. I even started the Gatorade station that sits right outside the performance center. It’s the little things that I do right now that will help build this program up.”

The boxer knew he wanted to work in this field from a young age.

“I was training so much when I was a kid,” he said about the first time he started noticing his eating habits. “It started to become obvious to me that eating healthy and the right amounts were just as important as working out. As my boxing career started to pick up, I started to focus more on my diet and starting eating better.”

While Algieri hopes to find more nutritionists to work for him, he is already thinking ahead of future plans for his job as well.

“I want to have a food table,” he said. “I want to have the table in the performance center or somewhere near the gym. Have all different types of food there for the athletes to have after they work out. Along with the food, there will be notes as to how many portions and calories they should eat of said food item.”

Algieri will look for his program to help athletes get in better physical shape, whether they play at Kenneth P. LaValle Stadium, Joe Nathan Field or Island Federal Credit Union Arena.

“I want to work with all the teams to make each athlete better at what they do,” he said.