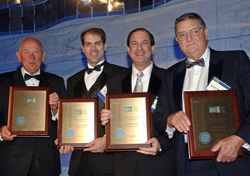 In May 2009, Stony Brook alumnus and President of Flame-Spray Industries Keith Kowalsky was awarded the 36th National Inventor of the Year Award by the International Property Owners Association for his Plasma Transferred Wired Arc (PTWA) Thermal Spray Apparatus and Method.

At Stony Brook, Keith earned his BE in Mechanical Engineering and his MS in Materials Engineering, played on the hockey team, and also met his wife Laurie Gathman ’97 (an Electrical Engineering major at Stony Brook and now a successful patent attorney who filed Keith’s first patent) in a differential equations class.

Below, Keith shares some thoughts about inventing, his experience at Stony Brook and advice for aspiring inventors and engineers.

Q: Can you describe your invention for the rest of us non-engineers?

The Plasma Transferred Wired Arc (PTWA) Thermal Spray Apparatus and Method was created to protect, enhance, and provide the ability to use and develop materials that allow more environmentally-friendly products to be manufactured while solving mechanical and material barriers.

Ford Motor Company recognized the PTWA potential and joined in our collaboration, because it allowed them to replace heavy conventional cast iron automotive engine blocks with lighter aluminum blocks sprayed by the PTWA process.

With PTWA, the aluminum can withstand the forces exerted by the mechanics of a running engine – plus it allows the engine block to be more compact, lighter weight, more efficient, greener and cheaper to manufacture. PTWA was used in the 2008 Nissan GT-R, which was voted the 2009 Motor Trend Car of the Year.

Q: How did you get into this business?

From early on, I always knew I wanted to design. In my senior year as a mechanical engineering major, I had a project putting together a mechanical component and gear and my professor asked, “What material is the gear made out of?” I had no idea! I remember saying to myself, ‘Oh my gosh, I better learn about materials,’ which first got me interested in materials. Then I sat in on one of Herb Herman’s lectures and decided I wanted to take his course, but I couldn’t get into it. So I asked him to be my advisor and I guess he felt bad about not letting me into his course so he agreed.

He was the one who introduced me to Dan Marantz who owned Flame-Spray at the time, one of the most genius engineers that I know. Dan inspired me to get into this surface technology business and gave me my first job out of college.

Q: What were the highlights of your years at Stony Brook?

Stony Brook gave me a lot of outcomes. I finished my degrees, met my wife, played hockey – I still play in the alumni game almost every year. But what I remember most were the people. Dr. Herman, my academic mentor and great friend, the guys in the lab – Glenn Bancke, Phil Stitt, Richard Myers, Henry Honigman, Frankie Burger, Lou Lipsett, and Bob Martin. The machinists encouraged me to learn how to make my own parts and they really took me under their wing. To this day, I still do machining. There were so many intangibles, but it was a great fit for me.

I also had a great opportunity to be a teaching assistant. From a speaking point of view, it’s how I learned to present my ideas. This thanks goes to Clive Clayton who taught me how to teach a class. Nancy Davies and the rest of the staff were always so supportive and Dean Shamash, of course, was an important mentor to me. Stony Brook was a really good place for me – I was very much at home there.

Q: You are named in over fifteen patents. How does an idea become a viable reality?

You need a lot of persistence and you need to work hard to understand the issues. It’s an evolution. In our case we developed a system that could provide wear-resistant coatings and we patented it. That is great and all, but you need to then look for a niche problem which needs a solution and is applicable to your invention.

In our case, we looked in the automotive industry. Their problem was they wanted to use aluminum engines, which are lighter and more fuel efficient but can’t withstand the normal wear within the engine bores due to running pistons. So they sent us an engine block and we sprayed the internal engine bores and they tested it and it passed first shot out. Then they started asking, “Will it last for 8 hours a day? For 365 days a year?” Then you need to get all kinds of kinks out of the device to work in a production environment. We kept testing and tweaking and finally Ford was ready to invest it in for one of their cars. That’s the evolution of it all.

Q: What advice would you give to aspiring inventors?

To become a well-rounded person, because life is so complicated right now. Today’s engineers need to stay attuned to different opportunities. For instance, I played on the Stony Brook club hockey team. There, I learned how hard you have to work to be the best you can be and, even more importantly, how to work with people and understand people. Those extracurricular activities are critical. I’m still very active in my community. I coach high school hockey, baseball and softball, I still play on in an adult league, and I’m a trustee on the school board in Oyster Bay. I also think hard work is an important factor. It took 14 years to get PTWA from a mere concept to being implemented in the Car of the Year. It was a long, tough road, but we really believed in the technology.

Q: What advice would you give to Stony Brook students who are interested in engineering?

A good engineer is a good people person that can work with his or her hands, get him or herself dirty, get on the computer and design a component and know how that component is made and how to test it and how to bring that component into a given application. I was one of those people that always tried to fix things. It is important to try to understand how things work, whether it is an appliance at home, your car, your personal computer, or a very high-level system. You learn so much from tinkering.

Even more importantly, students need to know that just because you spent time engineering a product, it might not be the best thing out there. If you realize halfway through that there are other ways to do it better, then follow the path of least resistance.

Engineers, by nature, solve problems. So engineers also need to remember that, at the end of the day, when all the problems are resolved, you’re no longer needed. So you have to be prepared that when the problem goes away, you have to look into other areas – you need to have the foresight to grow and follow the technology as it develops.

Most of all, if you’re going to be an engineer, you need to be true to yourself and follow your hunger. Also be willing to change and adapt to using new technologies.