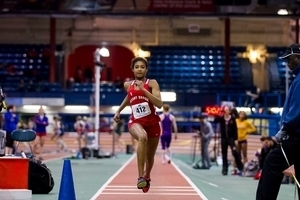 BOSTON, MASS. – The Stony Brook indoor track and field team finished their indoor season at the ECAC/ IC4A Championships. The women’s team placed sixth with a total of 33.25 points.

Coach Ronan’s Thoughts
“Today was another banner day for the program. Kaylyn Gordon showed that she is a big-time performer, producing a school record jump on her last attempt to beat the defending champion in the triple jump; every time she participates she competes to the very end and that is why she is rewriting the record books each season,” said head coach Andy Ronan.

“Mike Watts also produced another big performance in the 3000m, by taking second in the event with a super run that also produced a school record. In the same event, we had three other guys all finish under eight minutes and 20 seconds, super racing by the group,” added Ronan.

“Courtney Warden took the runner up spot with a competitive effort all the way to the line. Our women’s 4 x400 women’s team finished the meet in style setting a school record. We also had scoring performances from Holly Manning in the mile taking sixth. Chinque Thompson and Sarah Militano both scored in the 60m. This was the best team finish by the women in the ECAC Championships, finishing 6th overall,” continued Ronan.

“This ended a very positive indoor season for both the men and the women. Our goal each season is to get better and improve the profile of the program, we accomplished that this indoor season. I am very happy with the commitment and efforts of both squads to accomplish our goals,” said head coach Andy Ronan.