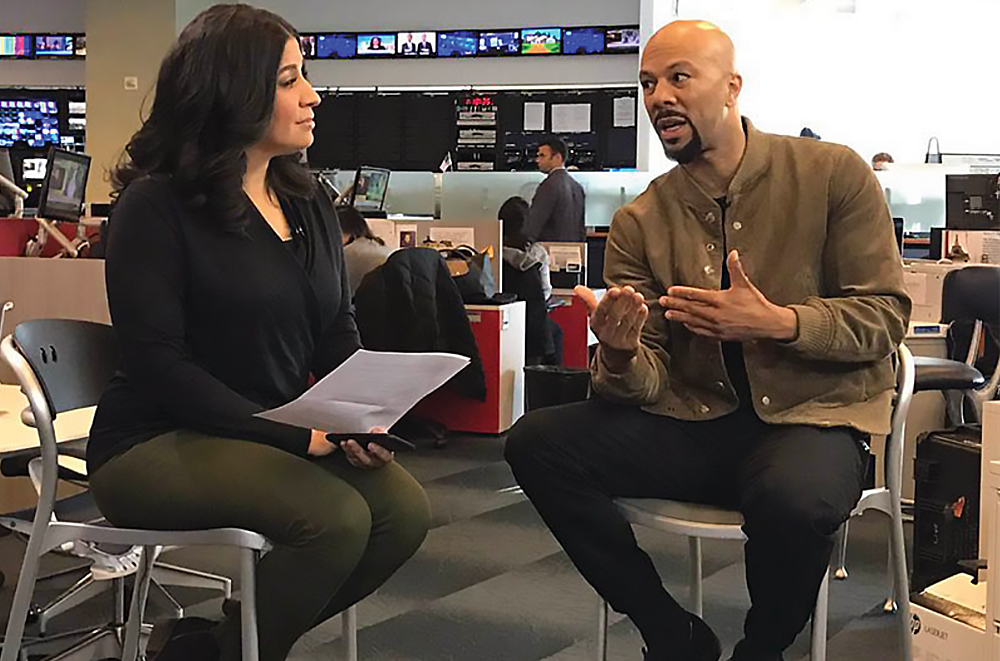 For Tanzina Vega ’96, now a nationally prominent reporter for CNNMoney, Stony Brook University provided much more than a top-notch education at a premium value: it was a window to opportunity.

Armed with a Stony Brook degree, Tanzina blazed a fearless trail that took her from an impoverished section of the Lower East Side to a highly visible journalism career at The New York Times and CNNMoney, where she now covers the red-hot issue of race and inequality in America.

“One of the best things about Stony Brook was the diversity of the student body,” Tanzina said. “Whether it was in class, in our student groups or in our media, the diversity of voices and perspectives was critical to my development as a writer and a journalist.”

Looking back, Tanzina realizes she also owes much of her success to great role models: her parents. They completed master’s degrees while raising Tanzina and her sister in public housing on the Lower East Side of Manhattan. Tanzina was raised amid a juxtaposition of two worlds — one of grinding poverty and another of great promise.

“From where I lived, at the intersection of South and Clinton streets, I could see a sweeping view of what Manhattan had to offer only a few subway stops away,” said Tanzina.

“The art and the commerce presented an alternative to the reality of my everyday life:  Wondering if I would make it home from school safely to my apartment complex, which reeked of urine and cigarettes.”

Money was necessarily a major factor in her choice of college. With scholarship funds from the I Have a Dream Foundation, an organization that provides individualized social, emotional and academic support to young people from low-income communities, Stony Brook was within reach. To make ends meet, she worked her way through college, holding multiple jobs.

“One of my fondest memories at Stony Brook and perhaps the most important class I took was a women’s studies seminar in my senior year, where we had to defend a thesis in which we attempted to solve a problem affecting women,” she said.

“I chose an issue that was close to my community — teenage pregnancy among low-income women of color. I spent an entire semester conducting interviews, doing research and coming up with creative and holistic solutions to a very real problem. That experience prepared me for delving deep into complex societal issues, an important and fundamental skill that journalists need.”

Tanzina got her first glimpse of the corporate world when she landed a summer internship as an investment banking clerk at Rockefeller Plaza.

“I worked there in the corporate library as a proofreader until college — I was the early version of Google,” she joked. “I proofed trades being processed through data entry, making sure the information on the trade tickets was accurate and up to date.”

But although Tanzina had been a sociology major, and minored in women’s studies and Latin/American/Caribbean studies at Stony Brook, she always enjoyed writing and telling stories and possessed a sensitivity to the world around her.

After graduation  she took a job at CMP Technology’s Information Week, in Manhasset, New York, going from an administrative temp to a full-time position in advertising sales. But that only whetted her appetite to work on the editorial side of a magazine. To that end, she resolved to explore the world.

Giving up the security of her apartment in Washington Heights and her first full-time job, Tanzina struck out for Barcelona, Spain and self-funded her own business teaching English as a second language. Armed with only “Spanglish” from summers spent visiting her grandparents in Puerto Rico, Tanzina enrolled at the Cervantes Institute to learn Castilian and Catalan.

Next stop was Asia. After backpacking through China alone, she took off for South Korea, where she taught English to students.

But the 9/11 attacks reminded her of home and drew her back to the US, where she went to work for CMP again as a magazine researcher and editor on Long Island. In 2004, podcasts were a hot journalistic medium, and she was offered an opportunity to co-host one.

To strengthen her journalistic skills, Tanzina enrolled at the CUNY Graduate School of Journalism’s inaugural class, where she studied multimedia journalism and urban reporting.

With television journalism anchor Connie Chung officiating and renowned broadcast journalist Tom Brokaw in attendance, Tanzina was one of three students in the CUNY’s Graduate School of Journalism’s pioneering class of 2007 to be singled out for an Excellence in Journalism Award.

Through a connection she made at CUNY, Tanzina landed a position as a news clerk at The New York Times, and over the course of eight years, worked her way up to producer and ultimately to reporter.

In summer 2013, two of the largest advertising holding companies merged. and Tanzina scored a byline covering one of the biggest business stories of the summer.  “It felt like a culmination for me. I got it done and I got it right,” she said. The Times then encouraged Tanzina to create the Race Beat for the national desk.

Roughly a year into her new assignment, the Times began a series of dizzying layoffs and buyouts; management killed the Race Beat. CNNMoney saw an opportunity to capitalize on the situation and offered her a job.

“After I left The New York Times I realized that I’d hustled and hustled and tried to follow rules and worked very hard to do all that I was supposed to do to achieve the American Dream,” said Tanzina. “But I realized that my experience was very different than most of the white women I knew in regard to climbing the corporate ladder and pay.”

Next year, the woman who left Stony Brook’s campus in search of self-realization will publish her first book, titled Uppity, a data-driven and anecdotal book that will explore what it is like to be a woman of color in today’s workplace.

“For people of color, and other marginalized groups it is not an initiative, it is an everyday reality,” said Tanzina. “Organizations often take a while to catch up to peoples’ realities. Race and gender are not trends.”

If you are looking to change careers, create the business or your dreams or are interested in an encore career, then this event is for you. As defined by Designing Your Life authors Bill Burnett & Dave Evans, an...

The SoMAS professor is an expert on disaster resilience, and finds that Stony Brook provides her with many opportunities for multidisciplinary collaboration.