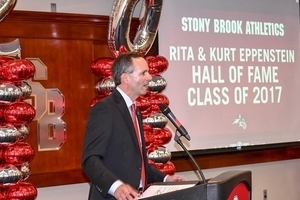 The Stony Brook Department of Athletics is proud to announce the Stony Brook Athletics Rita and Kurt Eppenstein Hall of Fame Class of 2018, which includes eight outstanding individuals who distinguished themselves during their time on campus.

“Each of these eight individuals has left an indelible mark by carving their own niche in our proud history.” Director of Athletics Shawn Heilbron said. “It is with tremendous pride that we welcome them as the newest members of the Stony Brook Athletics Hall of Fame.”

DAVID BAMIRO (Football)
Bamiro left his mark on the Stony Brook football program during his career that spanned from 2001-04. The relentless defensive end spent four years terrorizing quarterbacks, setting a new school career standard for sacks with 29, breaking the previous record of 25 that stood for 10 years. He currently sits second in sacks and is third all-time with 40.5 tackles-for-loss in program history. Bamiro, who started all 39 games that he played for the Seawolves, went on to become a two-time first team All-America selection in 2004 and was twice named first team All-Northeast Conference.

After his playing days at Stony Brook ended, Bamiro signed a free agent NFL contract with the Minnesota Vikings. He received a B.A. in Social Science in 2005 and is currently the Territory Manager for AndioDynamics, a medical device sales company

SARAH BOECKEL (Volleyball)
Boeckel was the premier setter on the Stony Brook volleyball team during her career that spanned from 1995-99. During her time at Stony Brook, she shattered the career assist record with an astonishing 4,949 assists, over 1,000 more than the previous record of 3,712. She also currently ranks sixth in career digs with 1,351 as primarily a frontline player. Boeckel helped guide Stony Brook to the 1997 ECAC Championship and the 1998 NECC Championship. The 1997 team claimed 36 wins, the most for a Stony Brook team during the Division I and Division II eras.

Boeckel graduated from Stony Brook in 1999 with a degree in Social Science and is currently a high school physical education teacher in Cape Elizabeth, Maine.

TYLER JOHNSON (Baseball)
Johnson literally helped pitch Stony Brook baseball into the 2012 NCAA College World Series. As a senior, Johnson tossed a complete game three-hitter against national powerhouse LSU in Game 2 of the NCAA Super Regionals to force a deciding Game 3. The Seawolves went on to “Shock the World” in Game 3 as they upset the favored Tigers to earn a trip to Omaha and the College World Series.

Johnson is one of the best pitchers to ever take the mound for the Stony Brook Baseball program. He earned 36 wins during his four-year career at Stony Brook, the most in school history and 10 more than the next closest Seawolf in the record book. His win total is also on top of the America East Conference and his 12 wins during the 2012 season still stands, along with fellow HOF inductee Nick Tropeano (12 in 2011), as the conference’s single season record. Johnson, a three-time America East Conference Scholar Athlete honoree, was named the 2012 conference Pitcher of the Year and earned second team ABCA All-American honors.

Johnson earned a degree in History in 2012 and is currently a teacher and coach in Nashville, Tenn.

SAM KORNHAUSER (Football/Administration)
Kornhauser came to Stony Brook in 1984 as the University’s first head varsity football coach. During his 22 years, Kornhauser guided the program from Division III to Division I status, winning 105 games along the way and setting the foundation for the successful FCS program that it is today. In his last season in 2005, he led the Seawolves to their first-ever Northeast Conference title.
Kornhauser was honored in 1995 by the Metropolitan Chapter of the Eastern Association of Intercollegiate Football officials with its Metro Award for his undying efforts to the game of college football. He also received the Johnny Vaught Head Coach Award from the All American Football Foundation in 2004.

Off the field, Kornhauser has also left an indelible mark as an administrator. During his time as coach, he also served as the men’s athletics director for three years. Following his career as a football coach, Kornhauser took on the role of Director of Athletics Advancement and Alumni Relations and has been at the center of the department’s fundraising initiatives that has created the Dubin Athletics Performance Center, the creation of the Touchdown Club and the soon to be constructed Indoor Training Center.

JORDAN McBRIDE (Men’s Lacrosse)
McBride not only broke the Stony Brook record for career goals scored during his career, he shattered it. His 175 career goals bested the nine-year old record by 42 goals. During his four seasons as a Seawolf, McBride earned four first team All-America East Conference honors and was a four-time All-America selection that included a third team nod in 2011, the same year he was crowned the America East Conference Player of the Year. In addition, McBride made a splash as a freshman with 44 goals which earned him America East Rookie of the Year honors in 2008.

McBride, a three-time Tewaaraton Award watch list selection, went on the be selected as the 13th overall pick by the Colorado Mammoth in the 2011 NLL Draft after he received his degree in Business Management from Stony Brook. He is currently a firefighter in Burnaby, British Columbia.

JESSICA SMITH (Women’s Basketball)
A four-year standout for the Seawolves from 2003-07, Smith became the first, and still remains the only, women’s basketball player in Stony Brook history to score over 1,500 points and grab over 900 rebounds in a career. Smith finished with an impressive 1,710 points and 920 rebounds in 115 games.

Smith received her undergraduate degree and after going on to play professionally in Switzerland, she returned to Stony Brook and obtained her nursing degree. She has since spent time as an ER nurse for Long Island Jewish Hospital and is currently at Columbia Presbyterian.

NICK TROPEANO (Baseball)
Tropeano is another in a long line of baseball standouts that have gone on to play at the professional level. Following his junior season in 2011, he was selected in the fifth round of the 2011 MLB Amateur Draft by the Houston Astros and three years later became the third former Seawolf to reach the major leagues when he made his debut with the big league club.

During his three year career as a Seawolf, Tropeano earned 25 victories on the mound that was, at the time, tied for the school record, and posted a 2.85 career ERA, the program’s All-time Division I record and fourth best overall. His 12 victories in 2011 topped the America East Conference and still stands as the single-season record along with fellow HOF inductee Tyler Johnson (12 in 2012). He struck out 275 batters, the fourth most in Stony Brook history.

Tropeano is currently a starting pitcher in the Los Angeles Angels rotation.

MEL WALKER (Men’s Basketball)
Walker remains to this day as the only Stony Brook men’s basketball player to advance to the NCAA Tournament during all four years on campus in a career that was highlighted by the 1977-78 team reaching the NCAA Division III Final Four. The then Stony Brook Patriots finished 27-4 that season and defeated Potsdam, St. Lawrence and Brandeis to reach the Final Four in 1978. The Patriots also won back-to-back Knickerbocker Conference titles in 1977 and 1978. Walker, a 1979-80 first team All-America selection, averaged 12.5 points and 3.6 rebounds per game during his career, including 18.2 points per game as a senior. He scored 1,226 career points and connected on 60.8 percent of his shot attempts.

Walker, who received his degree in anthropology and sociology in 1980, retired as a New York City Correctional Officer in 1981 and went on to help teach special education and coach basketball in South Carolina.

Stony Brook Athletics Hall of Fame
The Hall of Fame began in 1991 with the induction of its first members and was refurbished in the summer of 2015. The Rita and Kurt Eppenstein Hall of Fame was officially “reopened” during a ceremony on February 14, 2016.