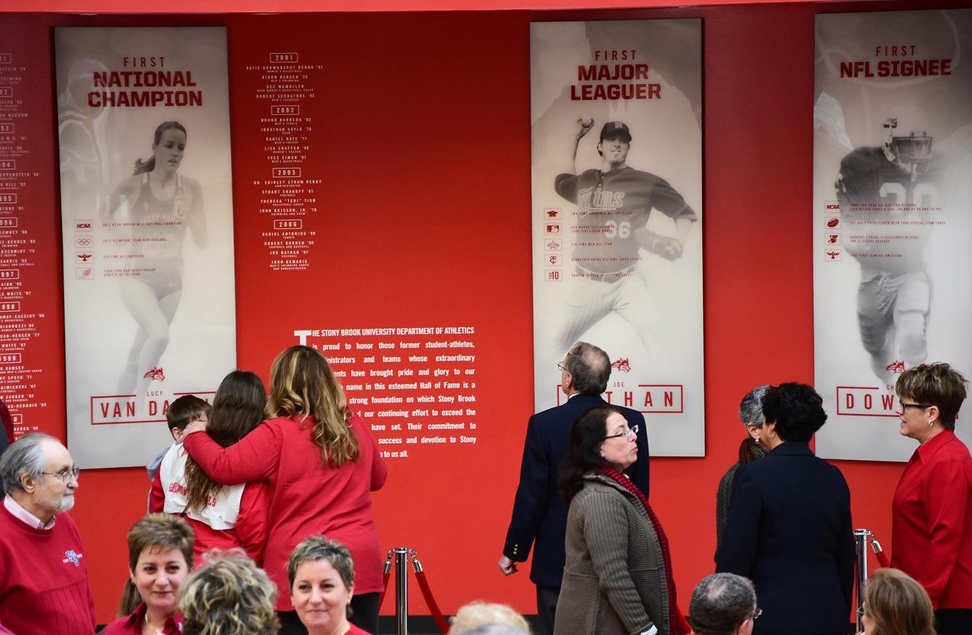 The Stony Brook Department of Athletics is proud to announce the Stony Brook Athletics Rita and Kurt Eppenstein Hall of Fame Class of 2017, which includes five outstanding individuals who distinguished themselves during their time on campus.

“Each of our five inductees has created a lasting legacy at Stony Brook through their countless achievements,” Stony Brook Director of Athletics Shawn Heilbron said. “I am excited that their names will be permanently etched in history as Hall of Famers.”

As the head coach for Stony Brook’s swimming and diving program from 1979 to 2012, Dave won more than 300 dual meets. After joining the Stony Brook University community in 1979 as an assistant coach for the men’s team, he founded the women’s swimming and diving program and worked alongside men’s swimming and diving coach John DeMarie. Alexander eventually took over the men’s program in 1995 and assumed the role as head coach for both Stony Brook programs until his passing in 2012 after a long and courageous battle with cancer. During his tenure as head coach, Alexander produced more than 100 All-Conference swimmers, four All-Americans and over 20 NCAA Championship qualifiers. He was a three-time Metropolitan Conference Coach of the Year award recipient (1991, ’96, ’98) and was named America East Coach of the Year in 2006. He also led the men’s team to the Metropolitan Conference Championship title in 1998.

Alexander graduated from SUNY New Paltz in 1970 and earned a Master’s degree from Adelphi in 1974 and is survived by his wife Moira, daughters Allison, Erin, Kate and Molly, and stepchildren Thomas and Erin.

Breres finished her Stony Brook softball career as the all-time leader in wins (76), strikeouts (853) and appearances (141). The three-time America East Conference first team selection threw three no-hitters during her career and currently ranks among the top five at Stony Brook in five categories. Breres, the 2008 America East Pitcher of the Year, helped guide the Seawolves to their first America East Championship and NCAA Division I Tournament appearance that year. She went on to place among the nation’s best during her 2010 senior campaign and was ranked 14th in shutouts (11) and 16th in hits allowed per seven innings (4.15). Breres was a two-time CoSIDA Academic All-District team selection as well as a NFCA Scholar Athlete recipient. She also earned back-to-back selections on the Louisville Slugger/NFCA All-Mid Atlantic Region team.

Jankowski was the centerpiece to one of the most legendary teams in Stony Brook Athletics history. The 2012 America East Player of the Year set seven single season Stony Brook records with 66 games played, 266 at bats, 110 hits, .414 batting average, 11 triples, 79 runs scored and 36 stolen bases as the Seawolves “shocked the world” by earning a trip to the NCAA Division I College World Series after winning the Coral Gables Regional and the Baton Rouge Super Regional. The first-team All-America selection by the ABCA and NCBWA also garnered ABCA National Player of the Year honors for his historic season. Jankowski owns the Stony Brook career record for triples with 16 and sits fourth with a career batting average of .366. Following the 2012 season, he was selected in the first round (44th overall selection) of the 2012 MLB Amateur Draft by the San Diego Padres.

He is currently in his second season as an outfielder for the Padres after playing in 131 games during the 2016 campaign.

Keith was the leader of the men’s basketball team that posted a school record 27-win season in 1977-78 on the way to reaching the NCAA Division III Final Four. The then Stony Brook Patriots finished 27-4 that season and defeated Potsdam, St. Lawrence and Brandeis to reach the Final Four in 1978. The Patriots won back-to-back Knickerbocker Conference titles in 1977 and 1978. Keith, a 1977-78 first team All-America selection, averaged 19.1 points and 8.1 rebounds per game during his career. His 1,793 career points currently ranks third in program history, while his 778 field goals still remains the school record. In each of his freshman and sophomore seasons, Keith averaged 21.7 points per game, while he posted 18.0 points per contest as a junior and 16.3 during his senior season.

Keith played professionally in Italy and Germany upon his graduation in 1979 with a degree in anthropology. He went on to work 22 years as a corrections officer at Riker’s Island and recently retired as the dean of discipline at the Charter School of Boynton Beach.

Oliver’s standout career on the track and the cross country course makes her one of the most decorated student-athletes in program history. During her career, she earned six All-America honors and competed in eight NCAA championship track events. She helped guide Stony Brook to four America East Cross Country titles and earned the 2010 individual title. On the track, Lucy was a 10-time individual champion at the America East Championships and was named the 2012 America East Woman of the Year. Her Stony Brook career reached its pinnacle in 2012 when she became Stony Brook’s first national champion in any sport when she won the mile with a facility record time of 4:39.76 at the NCAA Indoor Track & Field Championships held at Boise State. A two-time Olympian for her native country of New Zealand (London 2012 and Rio 2016), Oliver was a three-time US Track and Field/Cross Country Coaches Association Northeast Athlete of the Year.

Oliver, who graduated in 2012 with a degree in sociology and earned a master’s in liberal studies, currently is a social worker and continues to run professionally in her native New Zealand.