In Business, Bernie Brenner ’90 Takes on the Heavyweights 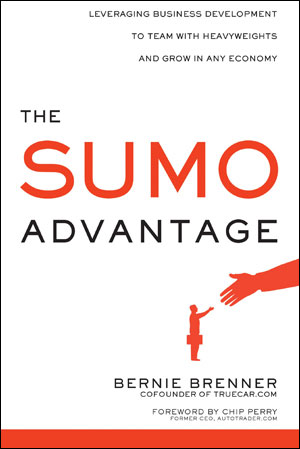 It all began in his dorm suite at Douglas Hall.

Bernie Brenner’s self-described career as a “serial entrepreneur” started when he and lifelong friend Adam Yahre launched a mail-order company during their junior year at Stony Brook University.

The venture — called Redline Performance and specializing in restoration products for classic cars — earned Brenner ’90 the award for Stony Brook University Entrepreneur of the Year in 1990.

More than 25 years and a handful of entrepreneurial endeavors later, Brenner is redefining how entrepreneurs do business. The former business management major was invited to campus to speak to Innovation Center and College of Business students to share the vision and strategies he outlined in his 2014 best-selling book The Sumo Advantage, Leveraging Business Development to Team with Heavyweights and Grow in Any Economy.

As the co-founder and executive vice president of business development at TrueCar Inc., a California company focused on changing how cars are sold, Brenner has secured more than 100 business development deals, including partnerships with such industry giants as AAA, American Express, Consumer Reports, GEICO, Nationwide Insurance and USAA. Truecar went public May 16, 2014 under the NASDAQ symbol TRUE and shot up 11 percent on its first day of trading.

Brenner lives and works in Austin, Texas, where TrueCar has an office. It was through Stony Brook MBA student Jeremy Alicandri that Brenner reconnected with his alma mater.

“I know him through the auto industry,” said Brenner. “Once I wrote the book, he blogged about it, and then suggested I come here to speak.”

Brenner has logged some interesting corporate miles since leaving Stony Brook, starting with a turn as a national promotion manager with record company MCA Records in New York City soon after he graduated in 1990.

In 1992, he founded the California-based 1-800-CAR SEARCH, also serving as the vice president of marketing and product development for six years. “It was a brilliant business, but way ahead of its time,” he said.

Next came PromiseMark Inc., an Internet-based company aimed at protecting consumers from identity theft, followed by Carfax, the vehicle history report company that was coming into its own.

“They had no business development department and [I was asked] to come in and build one,” he said. He stayed at Carfax just over two years and accomplished what he set out to do. In 2005, he co-founded TrueCar.

While addressing the students at Stony Brook, Brenner revealed some of the strategies he uses to leverage heavy-hitting corporations.

“Sales and marketing are a key component, but there is a parallel path to growing business development,” he said. “Everything I talk about comes from experience — 20 years of cutting deals. Sales is a numbers game. Business development, on the other hand, is a vision of what could happen if two companies come together. It’s all about strategic partnerships.”

“You have to identify your sumo— an industry giant who can help you fortify your company,” Brenner continued. By focusing on beating the competition and forcing them out of the “ring,” a smaller company can keep itself economically viable, he said.

One of Brenner’s first deals at TrueCar was with powerhouse USAA, an organization that serves the military and their families with financial and insurance products. By partnering with USAA, a company with 10 million loyal members, TrueCar provided a compelling reason for its potential customers to sign up — and sales accelerated.

“Above all,” said Brenner, “You must have the absolute conviction that partnerships will happen.

“You need to employ the strategy that this deal will happen with you or someone else, without saying it, and that your train is leaving the station with or without the partnership you are seeking.”

Brenner also believes in giving back. In 2010, he founded Thanks-A-Bunch, a nonprofit company that provides thank-you restaurant cards to U.S. troops, veterans and first responders.

“We all want to give back to these heroes for their service, but you can’t walk up to them and give them cash,” Brenner said. “It’s not about charity, but appreciation.”