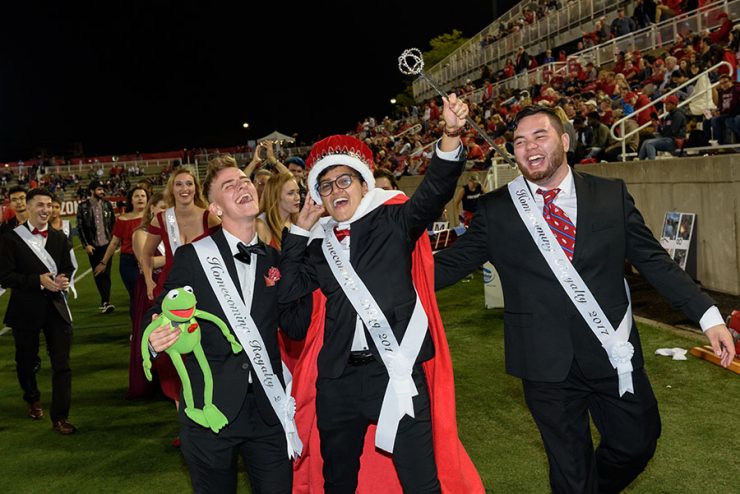 Stony Brook University is ditching the gender binary titles of “king” and “queen” for this year’s homecoming celebrations and will elect three students, regardless of gender, as Stony Brook Royals.

Since the crowning of Stony Brook’s first Homecoming King and Queen, Eric Levine and Jackie Delaney, in 1984, one male student and one female student have been crowned every fall since, but this year, the university is expanding the homecoming court to crowning three individuals, who could identify as any gender.

“We’ve moved to take affirmative steps each of the past few years so students could choose the formal wear and regalia they most identify with and choose the gender they most closely identify with,” said Rick Gatteau, Interim Vice President for Student Affairs and Dean of Students. “This has been met with gratitude and appreciation, but it hasn’t been enough; there was a community of students that this process was still not inclusive of. Based on rich conversations with students over time, the committee and judges, made up of faculty, staff, alumni and former court members, decided to take this next step.”

The change, initiated by the Student Affairs Homecoming Committee, was made after the Division of Student Affairs heard from the campus community that some students, especially those who identify as LGBTQ*, especially transgender and nonbinary students, did not feel comfortable competing for these and other contests on campus.

“Programs, events, and competitions that are categorized by gender put folks in the awkward position of either choosing to not be seen or affirmed for who they are or just not participating at all,” Chris Tanaka, Assistant Director of LGBTQ* Services, said. “This change has opened the door for more students to feel like Homecoming is an event in which they can fully participate.”

Previously, five women and five men were chosen as finalists, but this year, ten students — Shayne Clark, Mike D’Adamo, Allilsa Fernandez, Natalia Korba, Ian Lesnick, Nicole Olakkengil, Hayley Rein, RJ Samodal, Grayson Valentino and Jules Zambito — were chosen as finalists for the 2018 Homecoming Court, regardless of gender. With this change, the focus moves beyond gender to each nominee’s characteristics as ambassadors of Stony Brook University, including their deep sense of Seawolf pride, their activism and involvement across campus and their effort to build a caring and supportive campus community for their peers.

“I applaud the Homecoming Committee for making this innovative change. This is another step toward building a welcoming, caring, supportive and inclusive campus community where all students feel that they belong,” Lee Bitsóí, Chief Diversity Officer and homecoming court judge, said.

Stony Brook is the first school in the Colonial Athletic Association Conference or America East Conference to transition its homecoming court to all-gender titles. Other universities such as Penn State University, Purdue University, Northwestern University and the University of Iowa have also made similar changes in recent years.

Homecoming court nominees will take their Stony Brook spirit to the Sidney Gelber Auditorium stage during the Homecoming Court Creative Explosion at 7:30 p.m. Thursday, October 18, before the court is crowned at the homecoming football game against the Rhode Island Rams Saturday, October 20 at 6 p.m.

More about our winners:
Ian is a senior, majoring in Linguistics and Hispanic Languages & Literature. He is an RA, President of the Honors College, Director of Diversity Affairs for the Undergraduate Student Government and director of Camp Kesem. Fun fact: IAN was born at Stony Brook Hospital