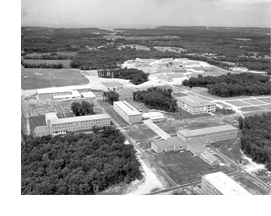 A Brief History of Stony Brook

The preparation of the Stony Brook campus began in 1959, when the State University of New York embarked on a $150 million building program on 480 acres of woodlands in Stony Brook. The Stony Brook campus opened on Sunday, September 16, 1962 with 780 students enrolled in its programs. The first buildings to be constructed were the Humanities and Chemistry Buildings and a single, corridor-style dormitory named G Dorm. In 1980, the entire Stony Brook University Medical Center was completed, creating the “East Campus.”

Stony Brook University has evolved from a teacher’s preparatory college to a world class research institution. The combined efforts of its dedicated students, faculty, and staff have led to the fulfillment of the University’s original mandate to “stand with the finest in the nation.” See photos of the Stony Brook campus over the years.

Everyone’s invited to attend the annual 2011 Homecoming game on Saturday, September 24. Look for the crowning of our new King and Queen during halftime. Click here for photos from Homecoming 2010.

The Roth Yachting Club names an admiral, a vice-admiral, and an honorary commodore to preside over the event. Students, faculty, and staff are all invited to compete and trophies are awarded to the winners. Nobody stays dry! Take a look at a video from Roth Regatta 2011, or some event photos.

1960s & 1970s Concerts
During the 1960s and ’70s, Stony Brook played host to many of the biggest acts in rock and roll, including Jimi Hendrix, Janis Joplin, Lou Reed, and Frank Zappa – not to mention the formerly fabulous Blue Oyster Cult, whose then-manager, Sandy Pearlman, is a Stony Brook alum. Regrettably, by the 1980s Stony Brook lost its appeal to major bands as industry economics demanded ever larger venues to make touring profitable. Click here for lots of old concert photos and some new ones, too!

Bridge to Nowhere
A relic of the 1960s campus building boom, the notorious “Bridge to Nowhere” was originally supposed to connect the Library with the Student Union. However, for reasons lost in the mists of time, construction was never completed and for years the raised walkway came to an abrupt and precipitous end. (Legend says contractors inverted the blueprint and built the structure wrong way round.) Eventually the Bridge was extended and rerouted across the Plaza, but it remained a rarely used eyesore. Few mourned its demolition in 2003. You can still view photos of the original Bridge to Nowhere and its demolition.

Mudville
During heavy campus construction in the late 1960s, a sea of slime threatened to engulf the newly installed Roth Pond in front of Cardozo, while vast tracts of campus were intermittently buried ankle-deep in mud. Students and faculty routinely had to maneuver their way to classes over makeshift plank bridges. In a 1968 protest, activists held a “mud-in” and presented goo-filled cups to administrators. Thankfully, more recent construction has been relatively muck-free, and some alums now confess to a perverse nostalgia for the days when Stony Brook was widely known as “Mudville.”

Boulders
Scattered about the Stony Brook campus are several hundred granite boulders, 20,000 year-old leftovers from the Ice Age glaciers that once blanketed Long Island. During the extensive excavations that accompanied the initial construction of buildings and roadways on campus, these boulders were unearthed and incorporated into the landscape. Today, many of these ancient rocks serve as brightly painted totems for fraternities, sororities, and other campus organizations.

Zebra Path
The Zebra Path is a striped geometric walkway connecting the Academic Mall with northern sections of campus beyond John S. Toll Drive. The eye-catching path lies in front of the Career Center and behind the Melville Library. In March 1981, as part of an advanced seminar in public art, Stony Brook student Kim Hardiman won a grant to beautify the campus. Her 232′ x 12′ handpainted walkway, regularly refurbished with new coats of paint, constitutes one student’s lasting tribute to the Stony Brook campus. Click here for photos of the Zebra Path taken recently by an alum.