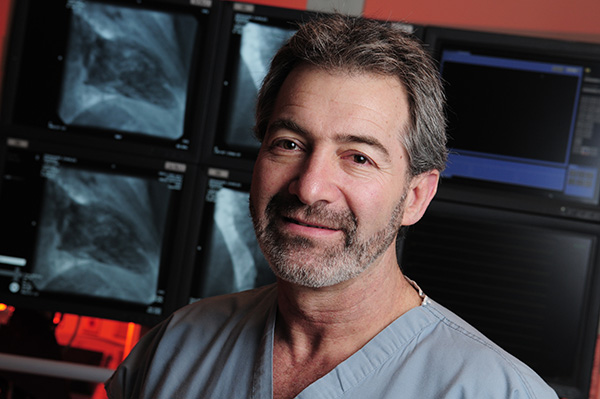 December 31, 2015 – Heart attack patients who had previously undergone cardiac bypass surgery are about twice as likely to have a delay in receiving angioplasty, or another form of revascularization, compared to heart attack patients who had no history of bypass surgery or previous angioplasty. This finding, from a study led by a Stony Brook Heart Institute cardiologist Luis Gruberg, MD, and published in the journal of the American College of JACC: Cardiovascular Interventions, may lead to a finding new ways to improve hospital arrival to treatment times for heart attack patients with a bypass history.

Revascularization to clear a blocked artery that causes a heart attack should be completed on patients within 90 minutes upon hospital arrival. For a majority of patients, this time is met. But for many reasons sometimes that time is delayed.

“Patients who have had previous bypass surgery present a more complex case with more complex anatomy,” said Dr. Gruberg, Professor of Medicine, Division of Cardiovascular Medicine and Director or Research for Interventional Cardiology at the Stony Brook Heart Institute. “Blood vessel blockages can be more difficult to identify after bypass procedures, and more images are also taken with these patients thus delaying their time for a procedure,” he explained.

In the paper, titled “The Association of Previous Revascularization with In-Hospital Outcomes in Acute Myocardial Infarction Patients,” Dr. Gruberg and colleagues assessed data from more than 15,600 heart attack patients at 297 U.S. hospitals. Overall, approximately six percent of those patients had previous bypass surgery. Of those patients, 76 percent received revascularization for a heart attack within 90 minutes upon hospital arrival. For the patients who did not have previous bypass surgery, including those who did have angioplasty, 88 percent received revascularization within 90 minutes upon hospital arrival.

Dr. Gruberg emphasized that the results illustrate a significant gap in the time it takes to get to treatment between the two groups and the need to improve hospital arrival to treatment times for patients who had undergone previous bypass surgery. He warned, however, that those with a history of bypass surgery may always face treatment delays because very often they have more advanced heart disease as well as other comorbidities to consider before treatment.

The next step in the research, he added, is to verify the findings by way of examining other large data sets of heart attack patients with and without a bypass surgery history.