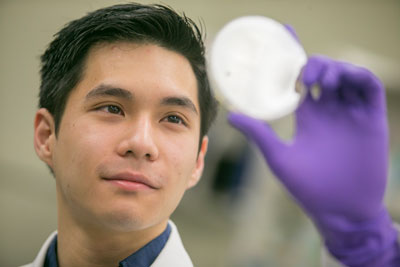 No one could dispute that biochemistry major David Chen ’15 is a high achiever. Later this year, the recent graduate is headed to Weill Cornell Medical College in New York City, one of the most selective institutions of higher learning in the United States. David is in elite company: Based on analysis by a recent U.S.News and World Report, 5,886 students applied and only 101 applicants matriculated.

The data also reveal that the students admitted to Weill Cornell have an average of 3.78 GPA. David, a Stony Brook University Scholar, graduated with a 4.0.

David said he owes his stellar GPA to a number of factors, not the least of which was his childhood zeal for exploring various scientific disciplines. As early as second grade, he became obsessed with dinosaurs, a fascination that was replaced by insects two years later. Every several years, he would embrace another scientific field until he settled upon biology.

It was at Stuyvesant High School in New York City — one of nine such specialized schools offering accelerated academics — where David discovered his talent.

“I became fascinated with the microscopic machines we call cells and soon my attention turned toward the macroscopic machine that I find most intriguing, the human body,” said David. “I owe much of my success to Stuyvesant’s competitive atmosphere.”

He said that Stony Brook was a logical choice to pursue research because of its reputation for a quality science curriculum at a great value, adding that being a self-starter has helped him to take full advantage of opportunities on campus.

When David first arrived on campus, he joined his first athletic team, crew.

“When my lungs reminded me of their limits with every stroke I made during a regatta, I knew that I could not be the one to let down my team and that gave me the endurance to keep going,” he said.

But maintaining a perfect GPA required its own kind of stamina as well as sacrifices.

“I had to give up crew in the middle of my sophomore year to make it easier to maintain my grades and focus on my work in the lab,” David said.

In the research lab setting, he found his role model, Nancy Hollingsworth, a professor in the Department of Biochemistry and Cell Biology, during his sophomore year when he applied for a position in her genetics lab. Not only did Hollingsworth mold his scientific thinking, but she also showed him what makes a great teacher.

“There is a moment that all undergrad researchers share — the moment after which your lab professor has explained the protocol to you and you’ve absorbed perhaps only 40 percent of what he or she said and maybe understand 20 percent of that,” David said.

“You’re trying to summon the courage to ask your professor to explain the protocol again or take your chances and risk failure. Time and time again, Professor Hollingsworth responded with great patience and understanding. It is a lesson I will take with me when I become a physician.”

At Stony Brook, David’s research examined meiosis, the specialized cellular division that produces gametes, such as eggs and sperm. He focused on the processes that give these cells genetic diversity. When gametes do not receive the necessary amount of genetic material, defects in the DNA exchange process can lead to Down syndrome and miscarriages.

As David became more at ease and learned to plan better, he found that he could make time for several extracurricular activities such as Spirit and Pride. As a representative, he organized and led his own event, a 5K run around campus.

He also traveled to Ghana and Honduras with the Stony Brook Global Medical Brigades, the volunteer organization that comes to the aid of underserved communities throughout the world.

“My experiences taught me how we desperately need to level the playing field. Had I or any of my friends been born into the villages we visited, we would be nowhere near as successful as we are now, no matter how hard we worked.”

David knows that every hard-working scholar needs a little downtime and recreation, which are essential for mental health. As a way to decompress from his studies, David seeks to perfect his pool game.

“When I play, the only thing on my mind is the shot. There is something beautiful about being lost in the task before you,” David said. “But what I really love about pool is that every shot presents itself as another opportunity for improvement.”

“I think that a lot of Stony Brook students could achieve a 4.0 if they applied good study habits early on,” he said.