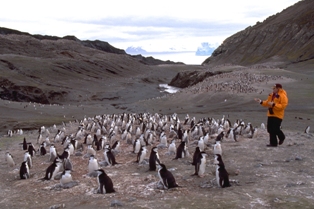 Ecologist Heather J. Lynch, an associate professor in the Department of Ecology and Evolution, has been awarded a Microsoft/National Geographic AI for Earth Innovation Grant that will support her use of artificial intelligence to track Antarctic penguin populations.

Lynch’s project  will couple AI with predictive-population modeling for real-time tracking of Antarctic penguin populations using satellite imagery. Through the grant, Lynch and Dimitris Samaras, an associate professor of Applied Sciences at Stony Brook will receive approximately $96,000 in direct support and about $75,000 in computing support.

“Penguin populations are tricky to track,” said Lynch. “Their remote habitat presents difficulties for both collecting and processing data, and identifying their colonies often means looking for hard-to-find markers, like guano stains against a similarly colored rock.”

Lynch proposes that AI can be used to improve, if not solve, both data challenges. With the grant funds, Lynch will use computer vision to find guano stains in satellite images. This will help inform and develop classification algorithms to generate population estimates for penguin colonies.

“With this penguin project, we have one of the first real examples where we can automatically get and process satellite imagery, generate population estimates and deliver that information through decision support tools — making it as readily available as a weather forecast,” Lynch said.

College of Arts and Sciences College of Engineering and Applied Sciences