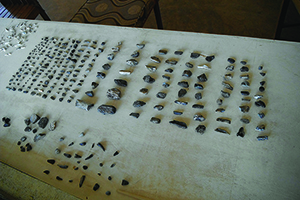 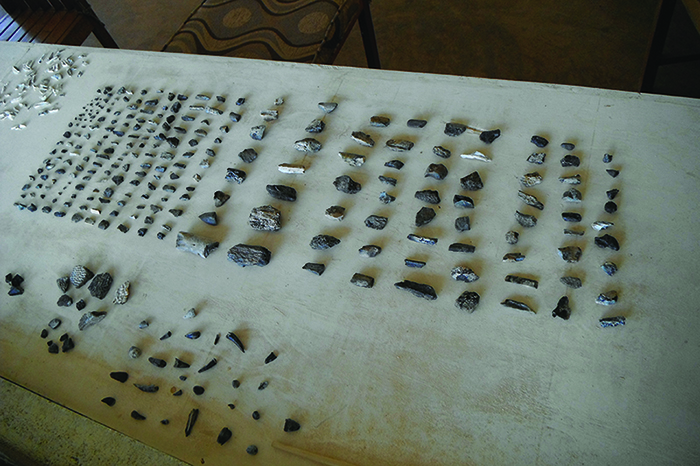 The fossil-rich sedimentary rock basin of Lake Turkana in Northern Kenya was set upon almost 50 years ago by renowned paleoanthropologist and Stony Brook professor Richard Leakey. To build on decades-long and groundbreaking fieldwork and research, Leakey and Stony Brook University founded the Turkana Basin Institute (TBI) in 2006 to provide the crucial infrastructure needed to facilitate future research and discovery in the remote desert region, now known to be the most complete and important repository in the world for human fossils.

Supported entirely through private philanthropy, the kinds of discoveries possible at TBI are manifest in a recent find by Sonia Harmand and Jason Lewis, both of Stony Brook University, who discovered humankind’s earliest stone tools, dating to 3.3 million years ago.

“The discovery pushes back the understanding of stone tool technology by three quarters of a million years,” said Lawrence Martin, director of TBI and Stony Brook professor of anthropology. “Whoever made these tools were not members of the genus Homo as it is now defined, which means we either need to expand the current definition or accept that these beings were something else.” The discovery as well as others made the cover of Nature magazine — widely accepted as the most prestigious journal in the world for human evolution publications — adding to the previous 11 appearances featuring TBI discoveries on the cover of the publication.

“The tremendous outpouring of support from the Simons Foundation and members of TBI’s advisory board is fueling the only field research of this scale in the world,” said Stony Brook President Samuel L. Stanley Jr., who is a member of the TBI International Advisory Board (IAB). “The discoveries routinely being made by Stony Brook University researchers and other researchers working with TBI are giving us all a better understanding of where we came from.”

TBI has completed two phases of fundraising and is now in Phase III, which involves completing construction at Ileret — on the east side of Lake Turkana — and enhancing infrastructure, including increasing the number of fossil preparators, curators and excavators. Approximately $12 million has been pledged or received to date in an effort to complete the $15 million campaign.

Martin explained that Phase III will bring TBI and Stony Brook closer than ever to realizing Leakey’s vision of a privately funded, fully equipped and staffed research institute with two field stations, a Nairobi office to facilitate logistics and its international academic headquarters at Stony Brook. He believes that TBI will lead to a significant increase in the number of discoveries in the region.

The IAB, comprised of 19 prominent philanthropists and scientists from around the world, has taken a lead role in fundraising efforts. Through their foundation, longtime Stony Brook benefactors Marilyn and James Simons — both IAB members — created a $7.5 million challenge grant to motivate others to invest in Phase III of TBI’s fundraising.

Most recently, Dorothy Lichtenstein, Hon. DHL ’14, Stony Brook Foundation Trustee and President of the Roy Lichtenstein Foundation, was compelled to support the TBI mission and Leakey’s vision to unearth the origins of humanity.

These state-of-the-future facilities have and will increasingly allow researchers to produce groundbreaking discoveries with a global impact in the fields of anthropology, archaeology, geology and palaeontology, as well as other fields such as botany, limnology, entomology, alternative energy, linguistics, development studies and health care.

“Philanthropists are sealing their legacy in the timeline of humanity,” said Leakey, whose wife Meave is a renowned anthropologist and a research professor at Stony Brook and TBI. Their daughter, Louise, is a paleontologist at TBI, where she focuses her study on the evolution of early human ancestors. “One of the major developments that’s going to come out of TBI over the next 20 years will be to recover physical evidence of human ancestors from the location and time period for which the increasing evidence from DNA suggests that every person alive today can trace their genetic ancestry back to somewhere very close to Turkana,” Leakey said.

Dexter A. Bailey Jr., senior vice president for advancement at Stony Brook University and member of IAB, said the accomplishments coming out of TBI reveal the power of philanthropic support.

“TBI researchers are on the verge of answering the greatest questions regarding our ancestral past, but only the relentless collection of new fossils will reveal the missing pieces in our history,” Bailey said. “This latest round of giving will enable the ongoing support needed to allow for the operation of permanent year-round field schools and research projects, giving researchers the ability to amass the evidence needed to unlock the secrets of the Turkana Basin and, ultimately, our human ancestry.”

The Turkana Basin, and consequently TBI, is extremely important because of what it can tell humanity about its past.

“Most of us would say if you don’t know your past, you know nothing because you don’t have any context,” Martin explained. “In this case, the lessons from the past are really clear that a species out of balance with the rest of the natural world doesn’t survive. There’s no precedent in our history for where we are now, so the big lesson is to try to restore some balance.

“There is an incredibly rich record of human past and the pasts of other animals that are uniquely preserved here,” Martin said. “If you look at all the other human evolution sites around the world, and there are many, they all fit within the Turkana Basin in terms of their geographical extent. The scale of Turkana includes samples of time periods from 70 million to 70 years ago.”

The Institute is meticulously maintained, Martin explained, and some of the revenue generated through field schools and grant-funded field research goes toward ongoing operating costs. “We believe this fundraising effort will allow us to double what’s been done in the Turkana Basin over the last 50 years in a much shorter time,” Martin said.

The Turkana Basin Institute (TBI) is a privately funded, non-profit initiative, founded by Richard Leakey and Stony Brook University. It is a collaborative, international, multi-disciplinary enterprise that seeks to facilitate fieldwork within the Lake Turkana Basin by providing logistical support to researchers. The primary research focus is human prehistory and related earth and natural science studies. As the most important repository of fossil evidence for human evolution, a major commitment of TBI is to safeguard the extensive fossil deposits in the region through engagement with the local communities. Over the past four decades, interdisciplinary field research in the Turkana Basin has been focused almost exclusively on prehistory. With the establishment of TBI, the research has broadened considerably in scope to include modern studies such as botany, limnology, entomology, alternative energy, linguistics, development studies and health care. Historically, it has been difficult to study or address these projects due to the formidable logistics entailed. In much the same way that the creation of Antarctic research stations opened that particular region to the scientific community at large, TBI provides the physical and human infrastructure to enable scientists to conduct research in this challenging environment.

The Trustees of the Stony Brook Foundation invite you to SAVE THE DATE THURSDAY, MAY 6, 2021 6 pm to 7 pm Virtual Program featuring an exclusive conversation between ALAN ALDA 2013 Gala Honoree and MAURIE McINNIS Stony...