From the Gridiron to the Octagon 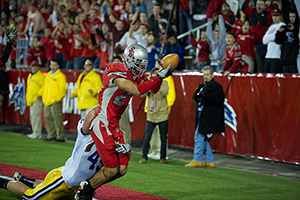 These days, Dominick Reyes is best known as “the Devastator,” but he’ll always be a Seawolf.

Reyes, a three-year starter for the Stony Brook football team who graduated as the program’s all-time leader in tackles, is 8-0 in his professional mixed martial arts (MMA) career, with his last two wins coming in the sport’s top promotion, the Ultimate Fighting Championship (UFC). Turning pro in 2014, Reyes supported himself as a technical support specialist at a California high school while fighting in regional promotions. Now, he’s making a name for himself in the UFC – where he’s won his first two fights in just over four minutes – and putting his business education to work outside the Octagon (the promotion’s trademark cage) as well.

How does the mental preparation for walking out to the Octagon differ from the mental preparation for running out onto the football field?
I would say it’s pretty much the same. You still get the same butterflies; you still get the same excitement. There’s just a little more on the line: it’s a fight. Also, in football, you still have other guys on the field; the game result wouldn’t necessarily be your fault if you lost your individual battle, whereas in MMA, if you lose your battle, the fight’s over.

Still, a lot of the preparation is the same: the film-watching, the game-planning, the attention to detail. It’s very similar, just a little more ramped up.

How would you say playing Division I football at Stony Brook changed you as an athlete, compared to how you might have approached fighting simply continuing on from your background as a wrestler in high school?
Football helped me become more athletic. It taught me how to train smarter, how to really break down an opponent and get the most out of preparation. I think I learned how to really win at Stony Brook, because there’s such an emphasis on winning in football, or really, any sport. In college football, when you don’t win, people start losing their jobs, you lose your spot on the field if you’re not producing. I got that “real world” kind of pressure from college football, where if you don’t produce, you can lose your job, and that taught me how to be mentally strong and get through a lot of things in MMA now.

How did you get into MMA? Were you watching while you were at Stony Brook?
I watched it a lot in high school, because my wrestling coach, Joe Stevenson, was in the UFC. He taught me how to wrestle, and he was on The Ultimate Fighter when I was in high school, so I was really into it, rooting on Joe. That’s where it started, I guess. Then, I went to college, and I played football, and I would go with my buddies to watch the fights, and now, I’m in it.

Besides the athletic training, what from your experience at Stony Brook do you use in your approach to your career?
Time management. Learning to be able to balance football, school, and a social life was tough. Now, it’s actually kind of easy: I can focus on my sport, and I have business stuff I have to take care of – I’m doing a few entrepreneurial things on the side – but learning about time management was huge. It’s one of the biggest skills I’ve picked up.

You studied business at Stony Brook. When you were fighting on the independent scene, before you got to the UFC, did that business education come into play for getting sponsors?
Somewhat. I didn’t get too many sponsors when I was on the regional scene, because I had a full-time job. I was supporting myself, and I didn’t really see a need to pick up sponsors. I have nutritional sponsors and a chiropractor, but I never got sponsors just for money. It’s almost a distraction from your time: instead of thinking about training and what you need to be focusing on, you’re thinking about trying to get sponsors. Those are pennies, and I was thinking about dollars: getting in the UFC.

What kind of support have you had from your Stony Brook coaches and teammates since you’ve been fighting?
It’s been tremendous. Coach Priore called me when I first got signed to the UFC to congratulate me, which was really cool. I had teammates fly out to Detroit to watch me fight [at UFC 218], which was really cool. We’re really close; we’re brothers. I’ve had a lot of really good support from the University.

What does it mean for you to see the way the program has grown since you’ve graduated?
It means a lot for me for Stony Brook to succeed, especially the football program. I devoted four years of my life to that team, and it’s really good to see them succeeding in the CAA and getting into the playoffs.

What would it mean for you to be able to come back to New York and fight at Nassau Coliseum, Barclays Center, or Madison Square Garden?
I think I’d get a lot of support from the Stony Brook community, and it would be great to come back and perform in my “second home state” of New York.

Keep up with Dominick as his UFC career continues by visiting his fighter profile at http://www.ufc.com/fighter/dominick-Reyes.