“John Hennessy’s pursuit of excellence in higher education, and his passion for the advancement of technology, will impact generations of innovators and educators,” said Fotis Sotiropoulos, Dean, College of Engineering and Applied Sciences.

“With this honor, we thank him for his immeasurable contributions that inspire our students and help build the narrative that they can inherit, be challenged by, and ultimately benchmark as a measure of their own success.  I am incredibly proud to recognize John as this year’s College of Engineering and Applied Sciences Distinguished Alumni Hall of Fame recipient.”

Stanford University – Two Decades of Academic Leadership:
Hennessy has served in major academic leadership roles at Stanford for more than two decades.  Hennessy was chair of Stanford’s Department of Computer Science from 1994 to 1996 and, in 1996, was named dean of the School of Engineering.

In 1999 he succeeded Condoleezza Rice as provost, the university’s chief academic and financial officer. In October 2000, he was inaugurated as Stanford University’s 10th president. In 2005, he became the inaugural holder of the Bing Presidential Professorship.

Today, Hennessy is Co-Founder and Director of the Knight-Hennessy Scholars program, designed to build a multidisciplinary community of Stanford graduate students dedicated to finding creative solutions to the world’s greatest challenges.  The program annually identifies a group of up to 100 high-achieving students from around the world with demonstrated leadership and civic commitment to receive full funding to pursue a graduate education at Stanford University.  It is the largest fully endowed scholars program in the world.

On Friday, April 6, Hennessy will address students, faculty and staff as the inaugural speaker in the College of Engineering and Applied Sciences Distinguished Alumni Hall of Fame Lecture Series. His presentation, “From Stony Brook to Stanford and Silicon Valley: Stories from a 45-year Journey,” will take place at 2:00 p.m. in New Computer Science, Room 120. 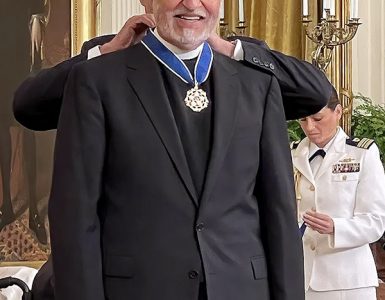