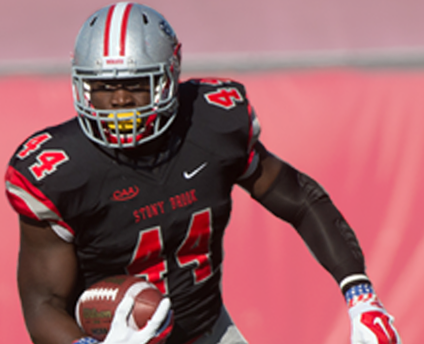 October 5, 2015—Click here to see former Seawolves Tight End Will Tye (#45) enter the game for the Giants, marking the first time a Stony Brook football alum played in a regular season game for an NFL team.

Former Stony Brook tight end Will Tye made history on Sunday afternoon when he became the first Seawolves product to appear in a game in the National Football League. Tye was signed to the New York Giants’ active roster off of the franchise’s practice squad on Saturday.

Tye made his debut in the first quarter and was in on multiple plays. He was also the target of Giants’ QB Eli Manning on a passing play in the second quarter.

The Middletown, Conn., native played in 23 games for head coach Chuck Priore and the Seawolves. Tye pulled down 79 catches for 1,015 yards and nine touchdowns in his two seasons at Stony Brook. He also returned 30 punts for 166 yards during his career with the Seawolves.