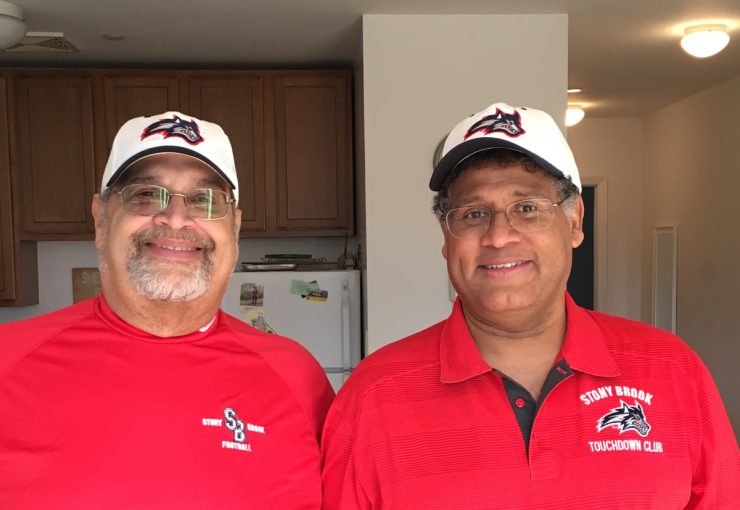 On October 20, a crowd of 12,702 people filled Kenneth P. LaValle Stadium as the Stony Brook football team steamrolled the University of Rhode Island, 52-14. It was the seventh win of the season for the Seawolves — and their eighth consecutive home win dating back to last season — and it helped Stony Brook close in on a second consecutive berth the NCAA Division I Football Championship.

It’s the sort of thing that Roberto Tillman ’78 and Miguel Tillman ’78 could only dream about in their student days, as they put in long hours for little glory on the University’s club football team…but dream about it they did.

“Back then, that’s what all the guys were thinking about,” Roberto said, “one day having a stadium and the whole nine yards. That’s what we all hoped it would be — playing with the big boys — but it was a very different world back then.”

Indeed, the team that Roberto and Miguel joined at Stony Brook was about as far from big-time college athletics as one could get.

“It was building a team from the beginning,” Roberto said. “Our bleachers were from a high school that had shut down its football program. We used snow fence as the fence around the field. When we played night games, we rented lights, and for halftime, we’d use a high school band.”

Of course, for two young men who’d never had the chance to play organized football as students at Bronx High School of Science — which didn’t field a team — it was just the right opportunity.

“Part of the experience was really to be part of something that was starting again new,” Miguel said, “the camaraderie with the folks who were participating at the time, the commitment that it took in terms of staying with the program for a number of years.”  And, while the Tillmans and their teammates achieved a certain amount of distinction on the field — playing in a national club championship game in their second season — the real benefit to their Stony Brook football experience came later.

As they carved out their careers — Roberto as an executive director in the New York City Department of Education and Miguel as director of marketing communications for Travelers Insurance — both Tillmans found that the lessons learned on the gridiron served them well.

“Everyone has different communication approaches,” Miguel said, “and particularly in the business world, you really need to be more fluid and adapt your style, to be open to new ideas and new concepts. That came out of working with team members who had different perceptions, and it goes down to some of the basics: learning strategies, learning how to block, and integrating that information for the task at hand. Learning about other people, how they do things, and then trying to adapt and see what works or doesn’t work for you. As our coach, Fred Kemp, used to say, it’s all about learning life skills through sports.”

“Working with a team was a big thing,” Roberto said. “I don’t really delegate a lot — that’s always been one of my flaws — but the team experience at Stony Brook has definitely helped with that.”

And, along the way, Roberto and Miguel have never forgotten where those lessons were learned. Both brothers have been loyal donors to Stony Brook Athletics and the University’s Fund for Excellence.

“It’s remarkable when individuals like Roberto and Miguel stay involved, continue to support us financially, with their time, with their energy, because they care,” said Stony Brook Athletic Director Shawn Heilbron. “What’s exciting is that they have seen how much Stony Brook has grown from the time that they were here, and they want to be part of that continued growth. They’re proud of their Stony Brook degrees; they’re proud of their time on the club football team, and how far we’ve come since they were here is a result of people like them giving when our program was in its infancy.”

Now, as they look toward the future, the Tillmans are ready to establish a legacy that will last.

A planned gift to Stony Brook Athletics will be used to establish the Roberto and Miguel Tillman Football Endowed Scholarship. The scholarship will be used to support a student-athlete who contributes to his or her team and achieves in the classroom, and while they were not scholarship athletes themselves, the Tillmans appreciate the necessity of scholarship support.

“I thought it would be a nice way to get a student-athlete help through school,” Roberto said, “because not everyone can get a scholarship.”

“We want to support a program that offers an opportunity for student-athletes to experience the same kind of life-skill training through athletics that they can leverage in the future for their careers as well,” Miguel added.

And, while the planned gift and establishment of the Tillman Endowed Scholarship aren’t expected anytime soon, the commitment to a planned gift makes an impact in its own right.

“A planned gift is such a special way for people to give back to the institution,” Heilbron said. “It’s a way to leave a legacy after they’re gone, and while we hope that it’s a long time until we see the money, it is important for us to know that they care enough, that they believe enough in what is happening here, that they want to support a Stony Brook student-athlete after they are gone. I think it’s a wonderful way to leave a legacy, so that a student-athlete will be able to realize their dream of attending Stony Brook, of receiving a degree from a world-class institution, thanks to their generosity. It’s wonderful for them to know that their name will forever be associated with Stony Brook Athletics and Stony Brook University.”