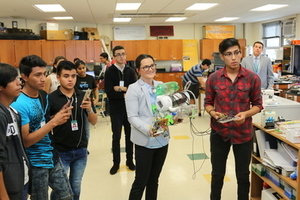 Rebecca Grella ’99, ’01, ’12 is a great believer in the art of telling a story, and she’s authoring a truly remarkable one as a research scientist, teacher and science consultant in the Brentwood Union Free School District.

Honored in January as a Stony Brook 40 Under Forty alumnus, Grella has developed a state-of-the-art lab at Brentwood High School, bridging the gap between her students and scientists at Stony Brook in a way that continues to make a difference. Brentwood was featured this past fall by WCBS after two of Grella’s students, Brian Torres and Pastor Martinez, were named semifinalists in the Siemens Science Competition, the latest students from a district challenged by gang violence to distinguish themselves in prestigious national competitions.

In addition to her work at Brentwood, Grella works with the Suffolk County government on environmental issues, and is currently the co-principal investigator on a Suffolk County Legislative Grant, “Scientists and Stewards Assessing Nitrogen Migration.”

Your Twitter bio (@rebecca_grella) reads, “Scientist, educator, photographer, cancer survivor and retired clown.” Retired clown?
I like to say that my clowning paved the way for where I am today. My mom owned a professional clown business. She started a company that did children’s birthday parties, and at the age of 14, I was trained by another clown on Long Island, and from ages 14 to 23, I did children’s parties on Long Island as Corky the Clown. I would definitely say it paved the way for me gearing up to do stuff in the classroom and in front of people.

How do you think that background helps you as an educator?
I think that any good scientist and any good educator needs to be able to tell a story. One of my mentors from afar — and this is something that I use all the time in my classroom — is the work of Alan Alda: Alan Alda’s innate ability to engage scientists in how to talk about their work — with ease, and to talk about science like it’s an everyday thing, as opposed to using these big words that nobody understands and no one can comprehend. I think that getting out there and performing definitely has a role. It provided me with that foundation to build upon, and it’s really why I can be successful at capturing students’ interest and hooking them when it’s important.

What involvement, if any, have you had with the Alan Alda Center for Communicating Science here at Stony Brook?
Our students here at Brentwood participated in the Flame Challenge when Alan Alda had just come to the University. At the very early stages of inception, Brentwood students were involved in that Flame Challenge, trying to explain questions like “What is a flame?” I often use those questions as jumpstarts for inquiry-based thinking in my own lab. I use his foundation of communication, and bridge it up to, “Now I want you to twist that up and talk like a scientist. I want you to use the new words you’ve discovered.” And now, for me in a population like Brentwood, where you have many students that come from vast different nations — we have about 57 different cultural nations represented by our student body; many are first language learners, many are the first in their families to go on to college — getting them to talk fluidly and openly about their work is really critical to having them become the next generation of scientists.

My goal is to incorporate their whole past set of experiences into getting students to talk about science. The whole language of science is different, and every discipline has its key set of vocabulary, so my goal is to really get students to talk about not only their science, but to get people to see that the work that they’re doing is of merit, and of publication quality. That’s where we’re going.

You first came here as an undergrad student in 1995, and you got your PhD in 2012. You’ve seen Stony Brook as a student over 17 years, let alone your time working with the University in your position at Brentwood. What jumps out to you most about how the University has changed in that time?
What’s awesome to see is that there’s so much more to choose from. I was always very interested in the media aspect of things, and to see degrees being offered in journalism is so important, because I believe that everyone needs to be able to tell a story, regardless of what field you’re in. This is a cutting-edge institution with a tremendous amount of resources and activities for our undergraduates, and I always encourage my students to take the initiative to consider going to Stony Brook.

What memories, in particular, stand out from your time here?
The founding member of the Department of Ecology and Evolution, Dr. Lawrence Slobodkin, took me under his wing. He believed in my science, and he had me working with him in his lab. He was working on a book, and I was working in his lab to organize and disseminate some of the information back to publishers for him, and that was when I was an undergrad. I really was thinking of going to medical school, and Larry said, “You really should think of pursuing some science.” The more time I spent in the Department of Ecology and Evolution, the more things came before me, and I was asked to go and be a research assistant in Madagascar. Because of my work that I was doing at the time with Larry, I was offered this great position, which then led me to complete my master’s degree, which was done part in Madagascar and part here on Long Island.

For me, the most memorable moment is that an eminent ecologist reached out to me and believed in the work that I was doing. It has truly served as the model for what I do with my students here in Brentwood. I truly believe in them, and what they have to offer and bring to the table. I like to believe that I can carry a little of Larry’s wit with me. He was probably the wittiest person that I have known in my life. That has really provided the foundation for me to be who I am today.

Doing part of your master’s in Madagascar, does that experience working across cultures inform some of what you do working with 57 cultural nations in Brentwood?
Absolutely. In fact, I am in Brentwood because of my experiences in Madagascar. I truly believe that education is the key to so many things. When I came back from Madagascar, went for my teaching degree, and came here to Brentwood, I felt like I was home, because the true nature of teaching is to help, and to nurture, and to guide, and I felt that way when I was working in Madagascar. I was helping write curriculums for their educational programs. It’s shaped who I am, what you see, and definitely has been part of why — and may be the most important factor — in my choosing to stay in Brentwood. I believe in helping those that needed it the most.

When you talk about telling a story, you’re also a photographer. How much does that play into what you do as an educator? Do you use your photos in class to illustrate what you’re talking about? Where does the photography come in? Is it something you studied as an elective at Stony Brook?
It isn’t, actually. My photography was always my art that I kept for me. Photography is my way of sharing the decisive moments — those moments that we cannot recreate — with the world. I see myself as more of a documentary photographer, even though I am an evolutionary biologist. I love people. I love seeing people in nature, I love seeing people on the streets. Wherever I go, I always have a camera. It is very unlikely that there is a day that I don’t have a camera. Sometimes, through the camera, we see things we can’t see with the naked eye, and maybe the parallel would be that my photography provides a glimpse of reality that other people can’t see. I guess, for me, the most important thing about being an educator is about learning how to listen, and I think that when I’m out in nature and I’m out with my camera, it makes me stop and think about what’s really going on in the world around me. It’s an emotional connection, and it has become a bigger part of the work I’m doing here in Brentwood.

There’s a photo I took of one of my students, that I posted after the shootings in Florida, of Claire, standing in the hallway, moving with people around her, in black and white. Claire is and was co-mentored by me and Stephen Baines in the Department of Ecology and Evolution, and she was a semifinalist in the Siemens competition. She did some great work with phragmites, the common reed, won a great award and went on for a full ride at the University of Tampa. I think that Claire is the face of hope, and I truly believe that the kids that we work with here in the lab, they’re going to make a world of difference. They are the future, and my colleagues and I believe in them.