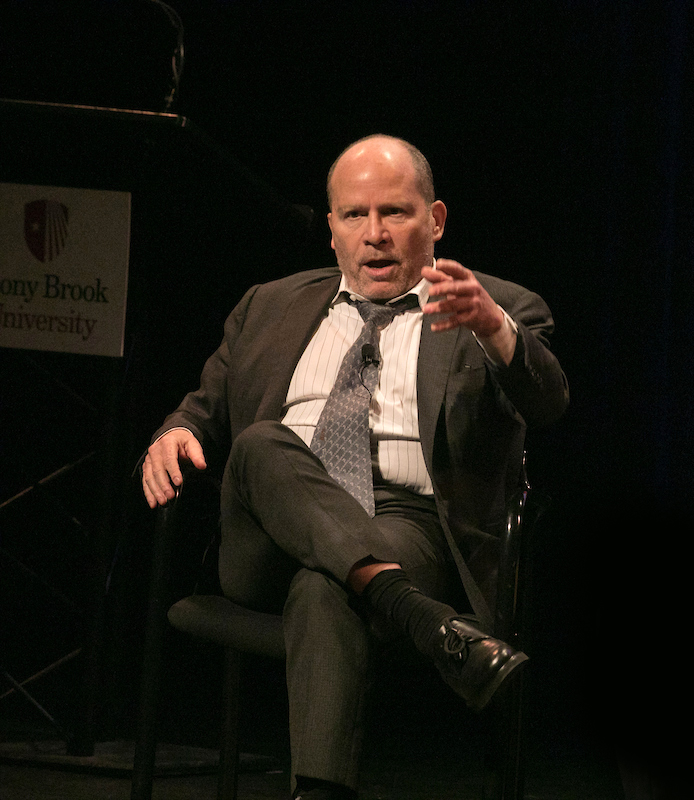 In the last years of his life, renowned financial journalist Marshall Loeb wasn’t shy about the future of the industry in which he built his career, especially with his son, serial entrepreneur Michael Loeb.

“What he said was, ‘The word will survive,” recalled the younger Loeb. “‘The printed word, I’m not so sure.’ He certainly foresaw the power of digital journalism.”

In that context, it’s only fitting that the new Marshall R. Loeb Visiting Professor at Stony Brook University will guide students in the University’s School of Journalism in navigating the ever-shifting digital media landscape.

“Michael Loeb’s investment in Stony Brook’s School of Journalism is an important investment in our future,” said Laura Lindenfeld, interim dean of the School of Journalism and executive director of the Alan Alda Center for Communicating Science. “As the media landscape evolves, we need to be responsive and help prepare our students for the dynamic careers into which they will enter.”

For Michael Loeb, Stony Brook is the ideal place to endow a professorship in his father’s name, and not simply because the University is home to the only accredited school of journalism in the SUNY system. As Loeb discussed the University with his longtime friend, Michael Dukmejian ’76 – Publisher of Bloomberg Markets and a member of the School of Journalism’s Professional Advisory Board – the University’s national leadership in social mobility resonated in a powerful way.

“My dad was a scrappy kid from Chicago,” Loeb said. “He was the only son of Monroe and Henrietta Loeb, and Monroe had Loeb’s Wrecking and Salvage. They essentially would walk around Chicago and pick up all the garbage and comb through it for what was resellable. My dad’s fate was to take over Loeb’s Wrecking and Salvage, but he escaped to the University of Missouri, where he lived in a chicken coop for two dollars a semester.”

In Stony Brook students, many of whom are the first in their families to attend college, Loeb sees echoes of his father’s career trajectory, as he emerged from Missouri to land a job at Time magazine, eventually rising to become managing editor of Money and Fortune magazines.

“My dad prided himself in being a subject-friendly journalist,” Loeb said, “which doesn’t mean pandering. What it meant was, if it was a controversial story, he would really endeavor to get both sides out, because there always was another side. He was known as a guy who would get the story right, and he also took real pains to fundamentally understand – not just write about, but understand – the subject.”

That approach rubbed off on his son, who used lessons learned from his father throughout a career in which he has built, backed, or funded more than 50 successful companies, including Priceline and Synapse.

“What you learn from all that is a method of inquiry,” Loeb said. “You approach everything with an appreciation that everything has layers. There’s something on the surface, but seldom is what is on the surface everything you need to know.

“They say that in negotiation, you really have to understand what the other side is trying to accomplish, and I think that growing up around my dad, the way that he would ask questions, and the way that he would think, that upbringing has been effective in that way, and other ways that are hard for me to articulate, because they’re with me all the time.”

Now, as Stony Brook journalism students look to build their own careers in a fast-changing media environment, the Marshall R. Loeb Visiting Professor will help them refine their own approaches to the challenges they face.

While part of that will undoubtedly involve search engine optimization and other digital strategies – “The fact of the matter is that if you know the SEO game,” Loeb said, “you will never ever be wanting for a job” – learning how to deploy them and balance them against time-honored journalistic standards will be just as important.

“I think that they will absolutely have to talk about the balance between fine journalism and fine information,” Loeb said, “and constructing a story that will be picked up, and will be read. We get back to the tree in the forest: if it falls down, and nobody hears it, did it really fall down? You can have a masterpiece, but if no one ever reads it, what good is it?”

Amidst those concerns, the expertise of a journalist who has thrived in the digital environment will be an invaluable resource for Stony Brook students.

“This is such an exciting opportunity and a critical investment,” Lindenfeld said. “As we look to the school’s future, it’s essential that we keep pace with the changing media landscape.I have no doubt that this investment will help important content garner the attention that it deserves.”

“This endowed visiting professorship gives students and faculty an opportunity to learn from experts working in their fields,” said Dexter A. Bailey Jr., senior vice president for University Advancement. “We are grateful to Michael Loeb for providing this opportunity in our School of Journalism, and are excited to meet the inaugural Marshall R. Loeb Visiting Professor appointee.”