For 40 Under Forty Alum Tom Manuel, Every Day is Jazz Day 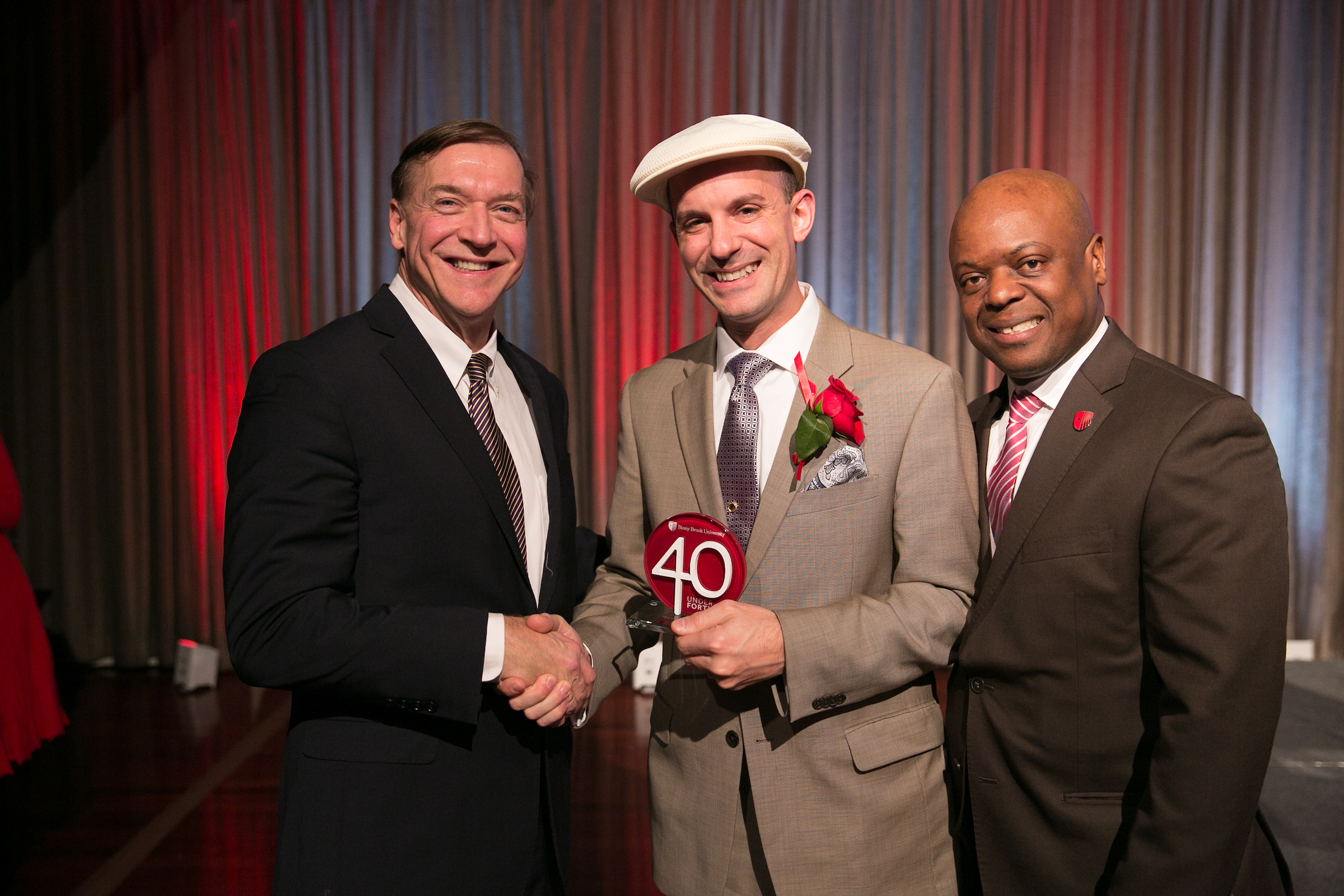 Manuel, who earned his Doctorate of Musical Arts from Stony Brook University after a distinguished career teaching music in Long Island public schools, is the president and founder of the Jazz Loft, a unique museum and performance space in Stony Brook. His accomplishments in establishing the Jazz Loft have been covered in The New York Times, Downbeat Magazine, Newsday, Jazz Inside Magazine and JazzEd Magazine, and he was honored in January as one of Stony Brook’s 40 Under Forty alumni.

How exactly did the Jazz Loft come together?
For years, I had played with all these old-timers and celebrated them and brought them in to do clinics with my students and would do these big concerts and events, and I would put memorabilia on display. I had kind of amassed this collection of things that had been given to me from them, and it was growing. The only bad part to being so close to guys who were from that heyday of jazz is that time does march on eventually; they pass. And so, then I began to inherit more when they would pass or when other people I didn’t know would pass. I would get the phone call: “You don’t know me, but my grandfather played with…” or “my father played with so-and-so, and I heard you were the guy to give stuff to.”

So, I was looking for a university or someplace to house it, but I also wanted it to be accessible, and sadly, there’s a lot of places that are great depositories for jazz manuscripts, memorabilia and recordings, but they don’t — either because of their funding, their resources, or staffing — have the ability to make it so accessible to people.

I had been interviewed for an article about some old-timer jazz musicians, and the woman interviewing me said, “You’re so interesting, I have to write a story on you.” I said, “Why in the world would you do that?”

I’ve rarely seen this in Newsday — but she got a cover page story in the arts section, and it ran for six pages with all these photographs, and this whole story about me and these people I knew and all these famous jazz musicians. The headline was, “Tom Manuel has a collection. Now all he needs is a museum.”

The phone rang, and it was Gloria Rocchio, president of the Ward Melville Heritage Organization. She said, “I read your article, and I have a museum. You have a collection. We should talk.” And, as they say, the rest is history. This space kind of became the depository for all of this wonderful jazz memorabilia that includes art, photographs, manuscripts, recordings, instruments and everything in between.

Since then, we were able to make a nice connection with the University, and we have our Young Artists program that meets here that started at the University, and that’s expanded and grown, which is really exciting. We have our DMA and Graduate jazz recitals and performances here, and plans in the making to have all of the undergraduate performances, including the big band, here next year.

Tell me a little more about the Young Artists program and the students that you’re working with and what those interactions are like, bringing this to them. How do you make jazz for them something that gets integrated into life, and not just something they do as an activity?
One of the things that’s so exciting about the Young Artist program is that it’s an audition-only program. We have this wonderful group of students that are just so passionate about jazz and about their instruments and about music. Being able to have that experience and learn and study here at the Loft is such a thrill on many levels. First of all, there’s the thrill of being in this environment, this 6,000 square foot space that is completely dedicated to the art form we’re studying. This room we’re sitting in, surrounded by this amazing artwork, and having this incredible backline and the stage…this is where we create our art. Right there, it’s a home run.

It’s so amazing to be here and if we’re talking about a specific concept…like, we were talking about the importance of time, and how important it was for all the students in jazz to be timekeepers. We went downstairs and sat in Milt Hinton’s basement recording studio that’s recreated here at the Loft. I got to tell the kids in Milt’s room how he was the master timekeeper, and I pointed to his bass flight case that says, “Milt ‘The Judge’ Hinton.” We got to discuss why his nickname was “The Judge” because his time was so solid. I could have told that story in a rehearsal space at the University, or anywhere for that matter, but wow, was it inspiring to tell that story sitting in Milt’s room, on Milt’s couches, surrounded by Milt’s books and photographs and his record collection, all of his equipment, and there’s his flight case. We have so many moments here at the Loft where the history really does come alive, and we’re able to take music from the archives, scores from the archives, and look at the actual pieces of music that John Coltrane played, Miles Davis, Bill Evans. Even the recordings we listen to, we could easily just flip open the laptop, but our listening sessions are always on LPs or 78s. The students get to hold the LP covers, read the liner notes, talk about the cover art. It’s an experience you just don’t get anyplace else. 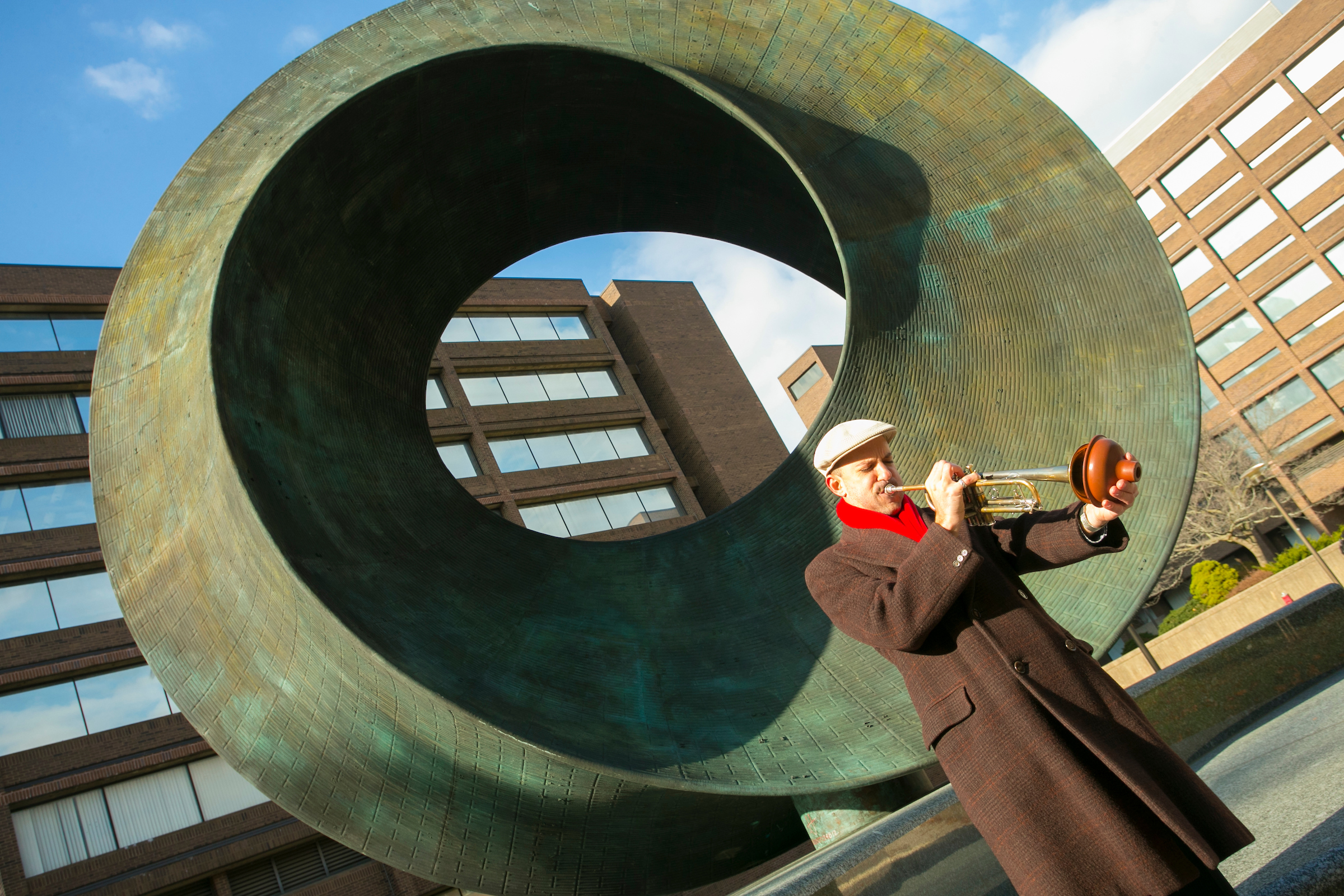 Obviously, that’s not how students are used to experiencing music. What do you see in their faces when they’re holding those LPs?
It’s amazing. To us, the concept of liner notes is nothing new, and the concept of knowing whom you’re listening to is certainly not a new concept, but it is one of the flaws that has come along with technology. These students download albums, and they don’t know who the piano player, the bass player, and the drummer are in the trumpet player’s quartet. They don’t know when the piece was recorded. They don’t even know what the person looks like in many cases. There’s that big piece of the story that’s missing. And then, you read those liner notes, which are a story, and you find out about the recording session and what went wrong, what went right, and why it was so magical, who was supposed to be there, who wasn’t there. You look at the cover art and see the cross-pollination between artists and photographers and musicians and writers and poets. What I see in the students’ faces is just this thrill, this amazing interest, because they’re looking at it.

When they start making the connections, what’s really amazing is from week to week, month to month, year to year, to hear a student say, “Oh yeah, and that’s the piano player we heard two weeks ago. Wasn’t he the guy on that album? Didn’t he play in this quartet? Wow! He’s 18 years old, he became his own big name, but he was a sideman. He was starting off in this group! He came up through the Ellington band.” They make the connections.

And then, depending on whom you have coming through, and the artists they get to play with at the Jazz Loft, at what point do they get to connect themselves to that lineage?
That’s part of the real message. Knowing where you fit in that lineage is so important. It’s not just being able to teach great history, and have students know all the players and connect all the dots and make all the connections, but to be able to do that and say, “And now, I’m next. What am I going to say? Where am I going to take the music? He played with him, and he played with him, but now I’m next.” Having that understanding of where you came from, that’s our own family tree. That’s very important.

At what point in putting this together did it sink in that it was going to work?
I think in my heart, I always knew it was going to work, because I’ve always seen how people respond to great art, but there were moments and there still are moments where I just know, and it transcends numbers. I could say, “Well, our shows, for the most part, are always full if not sold out,” which is true, and by a business model, you would say, when that started happening, I knew this was going to work, and we’re not going to shut the doors. But the way I define “working” for this place is reaching people.

I remember the first time we had an older man who had a comeback…92 years old, sold out show. He hadn’t played in ages, and had an incredible career back in the late 30s and 40s and 50s. I remember the first time we had big name people excited to come here. I remember the first time we had great press in the New York Times. For me, they were moments when I felt like people’s lives were really touched. I remember getting emails thanking me for creating this space and giving it to the community. I remember once a mother stopping in, and she had her daughter, and her daughter really wasn’t happy to be there — teeny tiny kid — and I told her what we were, gave her a calendar and brochure, and I said, “There’s a performance upstairs. If you want, use the back stairs, bring your daughter, and maybe you can just peek in.” When they came back down, the little girl who didn’t want to be here, she had never seen live music before, and the kid loved it and didn’t want to leave. I said, “Yes! There we go, one more!”

There’s a lot of moments like that. I remember when things happened in our country’s climate that were not necessarily good things on the news, I remember people coming here and being at the door and saying, “With everything going on, I just needed to come here and celebrate.” I think the Loft celebrates all those things that are good, which is collaboration and teamwork and listening to people and love and compassion. To have people verbally saying and acknowledging that that’s what the Loft represented in times of turmoil, that’s when I said, “Wow, this place is working. This place is special.”