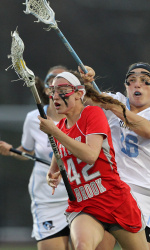 Tryouts to be held June 12-14 at Johns Hopkins

Four members of the Stony Brook women’s lacrosse team have been invited to participate in the U.S. National Team tryouts, US Lacrosse announced Tuesday.

Fleming, a three-time all-conference selection and two-time first team All-America East honoree, started all 20 games on defense, totaling 27 ground balls and a team-high 21 caused turnovers. She was part of a defense that allowed fewer than 10 goals in 19 of 20 games this season.

Meritz earned her second straight all-conference selection after totaling a team-high 38 ground balls and 16 caused turnovers. Meritz, who has made 61 straight starts, keyed a Stony Brook defense that finished first in Division I in scoring defense (5.50) for a third straight year.

Van Dyke registered her second straight season with more than 55 points. The first team all-conference pick tallied 39 goals and 20 assists. She accounted for hat tricks in six games in 2015, including a season-high five against Binghamton. Van Dyke led the Seawolves with 50 draw controls and finished second with 19 caused turnovers.

Yevoli finished 2015 with 13 goals and three assists in 20 games. She recorded 24 ground balls, 19 draw controls and 15 caused turnovers, all of which ranked in the top five on the Seawolves.

Stony Brook went 18-2, winning its third straight America East Championship and advancing to the second round of the NCAA Tournament.